The years immediately following USEUCOM’s establishment in 1952 were predominately focused on building up to support NATO’s mission of defending a free and prosperous Europe. Once those forces were in place, the command began to broaden its operational experience in a variety of ways. This was especially the case in Africa and the Middle East, where post-colonial upheavals warranted multinational action. Although these regions were not formally a part of the USEUCOM area of responsibility (AOR), the command’s at-hand Cold War forces were called upon to quickly respond to emerging humanitarian and peacekeeping commitments.

After gaining its independence from Belgium on 30 June 1960, the newly formed Republic of the Congo experienced intense political turmoil that would lead to a five-year period of civil strife. At the request of Congolese President Joseph Kasavubu on 13 July 1960, the United Nations (UN) authorized the creation of an intervention force to help the fledgling government maintain political independence, and law and order across the country. The UN contingent would be composed mainly of Indian, Swedish, Malayan, Canadian, and other African troops while the U.S., Great Britain, and the Soviet Union provided air transport and materiel support. In response to the Congo Crisis and the subsequent UN action, USEUCOM executed Operation NEW TAPE.

Within 48 hours of the UN’s approval, an initial contingent of 595 Tunisian soldiers landed in the Congolese capital of Leopoldville courtesy of airlifters flown by U.S. Air Forces in Europe’s (USAFE) 322nd Air Division. In subsequent missions lasting from July to December 1960, USAFE C-130 Hercules and Military Air Transport Service (MATS) C-124 Globemaster aircraft would deliver 16,081 UN troops and over 2,500 short tons of equipment to the Republic of the Congo in support of peacekeeping efforts. 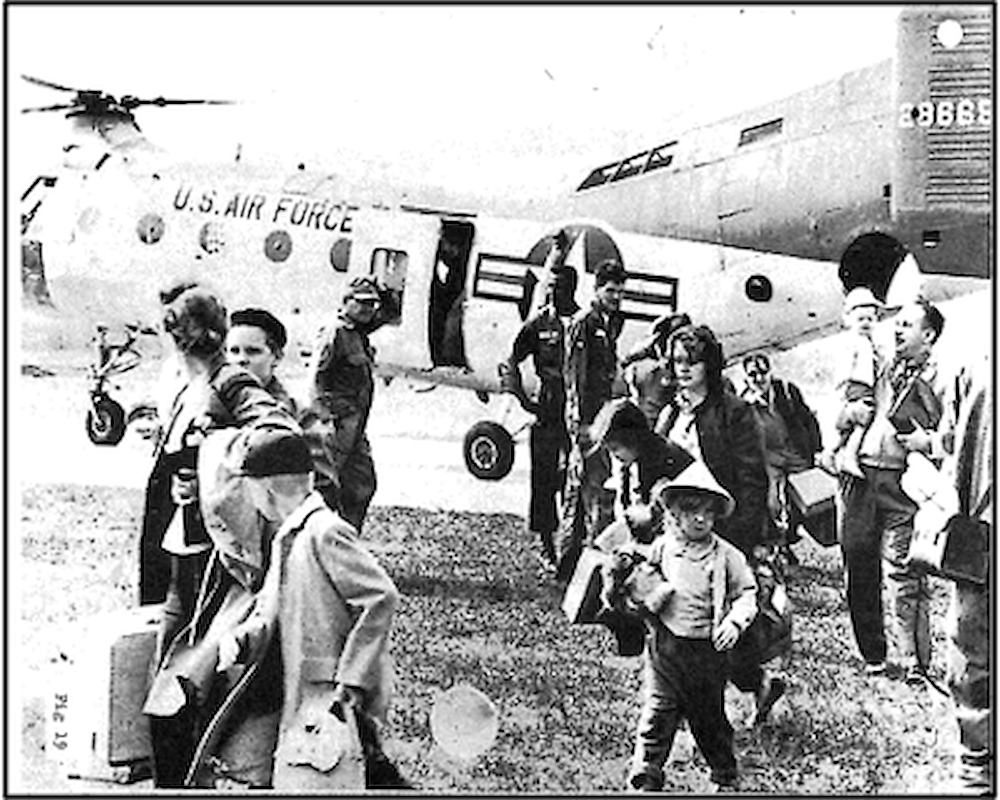 The tribal warfare and ethnic violence endemic of the Congo Crisis also created a large refugee emergency. As attacks against European nationals and others in the Congo increased during the crisis’ early days, USAFE transported Air Rescue Service and U.S. Army Europe (USAREUR) helicopters and support troops to key locations in Congo to help with evacuations throughout the country. During a supporting effort known as Operation SAFARI, other USAREUR liaison aircraft joined the helicopters and USAFE tactical airlifters in transporting refugees to airfields where larger MATS aircraft would fly them to bases in France and West Germany, or to UN-sponsored safe havens in Libya, Ghana, Nigeria, and Senegal. In total, 2,640 refugees were evacuated during SAFARI, including at least 300 American citizens.

The chaos in the Congo also quickly led to severe food shortages. Shortly after U.S. Ambassador Clare Timberlake requested humanitarian assistance, USEUCOM initiated another mission within Operation SAFARI to deliver 1,000 tons of foodstuffs to Congo from 15 July-10 August 1960. Throughout the rest of the crisis, USAFE and MATS aircraft would continue to deliver thousands of tons of relief supplies from bases in Europe. 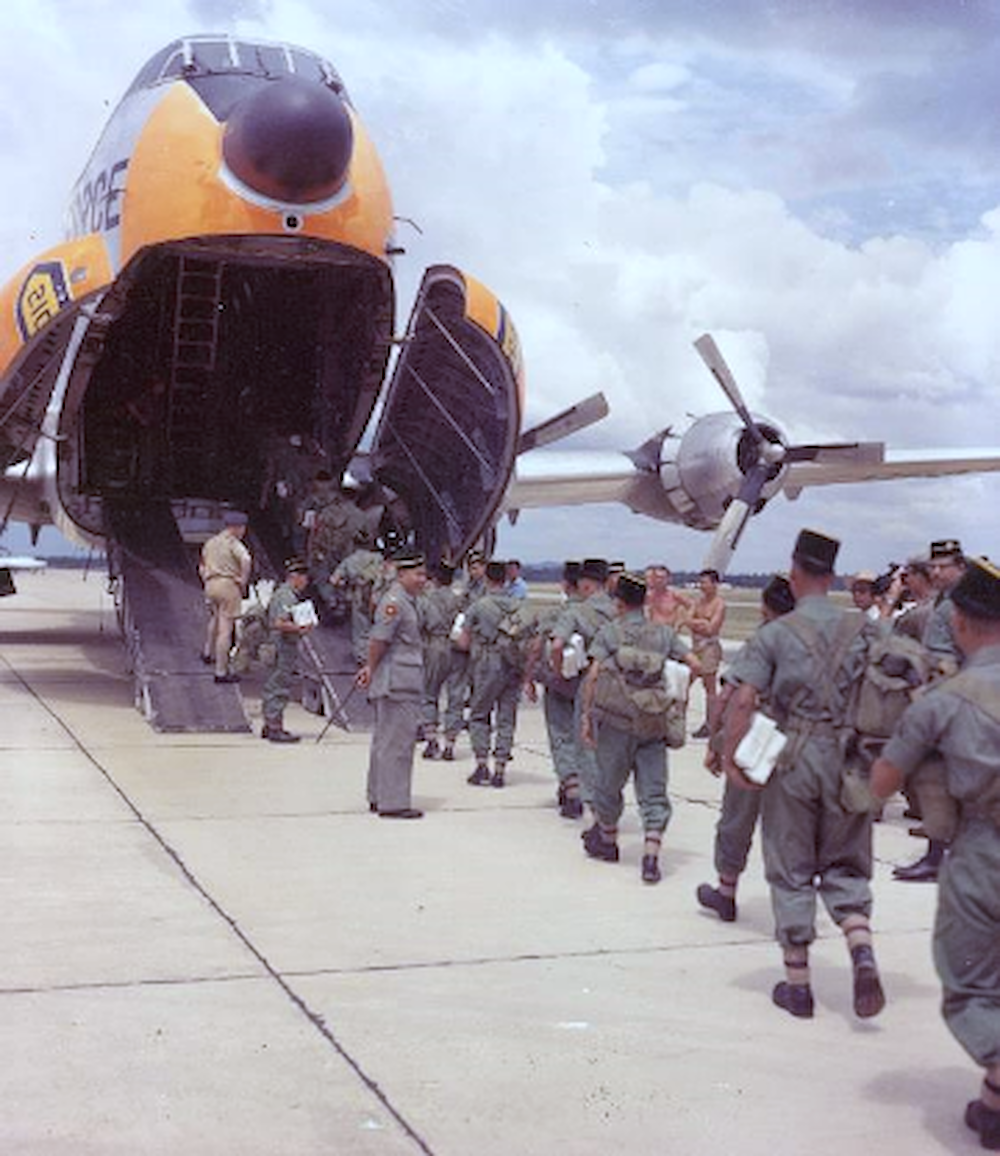 After the initial surge of operations in 1960, NEW TAPE missions continued on a smaller scale as rotations of UN troops took their turn in maintaining the peace through June 1964. Throughout this period, U.S. forces in Europe played a crucial role in maintaining stability in Congo, as well as in reducing human suffering by means of their robust logistical capabilities and unmatched levels of readiness. The Joint Staff issued a statement shortly after Operation NEW TAPE formally ended which encompassed the achievement well: “Their expeditious and efficient support enabled the United States Commander-in-Chief, Europe to airlift UN troops and equipment to the Congo in a manner which prevented the potentially dangerous events in that area from expanding at the time into a situation which might have endangered the peace of the world.” The operation was also notable at the time as being the largest and most extensive American airlift to date, even exceeding the scope of the Berlin Airlift in 1948-1949.

Following the end of the formal UN mission, the tenuous peace holding the country together broke apart once more in the late summer of 1964. After so many years of fighting and more recent setbacks at the hands of rebel factions still active in eastern sections of the country, the Congolese army was weak and demoralized. A dysfunctional central government struggled to maintain order even with the assistance of mercenary elements hired from outside sources. In late August, rebels took an estimated 1,500 foreigners as hostages, including 60 Americans and hundreds of British and Belgian citizens. As fighting between loyal government forces and the rebels continued, the UN attempted to secure the release of the hostages but to no avail. Although just over 200 Europeans were freed after government gains in early November 1964, leaders in the United States and Belgium began to fear that the remaining hostages were in ever increasing danger. American President Lyndon Johnson directed USEUCOM to undertake planning with Belgian counterparts for a rescue mission. Although unwilling to commit combat troops, the U.S. would provide the airlift for Belgian soldiers in what was to be known as Operation DRAGON ROUGE.

On 17 November 1964, C-130s from USAFE’s 332nd Air Division began the operation by airlifting 550 Belgian paratroopers to Ascension Island in the Atlantic Ocean, where they could stage subsequent missions into Congo if last minute negotiations failed. A week later as talks broke down, the C-130s loaded hundreds of combat-ready troopers for an air drop over the Stanleyville airport. The arrival of these forces came just in time as rebels had already begun reprisal attacks on groups of hostages. The Belgian troops successfully evacuated nearly 1,200 fellow countrymen and others to the airport at Leopoldville, often with the help of the 332nd airlifters. From there, the freed hostages were airlifted to safety, while additional commando operations took place to liberate 200 more foreign nationals on 26 November. The next day, the American C-130s began withdrawing the Belgian forces from Congo and completed all related DRAGON ROUGE operations by 2 December.

These early operations in Congo were notable for several reasons. First, the vast expanse of the African continent represented a significant logistical challenge that was met primarily through the use of ever more capable military airlifters. The distances between bases in Europe and the limited number of useable airfields in Africa often constituted thousands of miles, and flights could last well over ten hours for a single leg of each journey. These operations also were key opportunities for the command and its components to work with the UN and other multinational partners. Ensuing missions on the continent prompted the Joint Staff to formally add sub-Saharan Africa to the command’s AOR in 1983. Two decades later, USEUCOM assisted in the establishment of U.S. Africa Command in 2008 and continues to work closely with them on issues in a crucial part of the world.

This brief paper is part of a series leading up to USEUCOM’s 70th Anniversary in August 2022.