May: EUCOM In Command

During its seven decades of service, U.S. European Command (USEUCOM) has had eighteen commanders, all of whom led distinguished careers. Most had also served in some capacity in Europe prior to assuming the post as senior U.S. military leader in theater. The following is a series of short biographical sketches on each 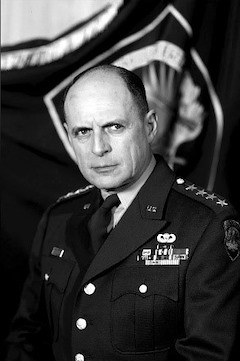 General Matthew B. Ridgway, USA, became the second Supreme Allied Commander Europe (SACEUR) upon General Eisenhower’s departure and subsequent retirement. He became the first U.S. Commander-in-Chief, Europe (USCINCEUR) on the day the command activated, 1 August 1952. Just prior to his arrival in Europe, General Ridgway had served as the commander of all U.S. and United Nations (UN) forces in the Korean War since April 1951. Before that, he was a distinguished commander in the Mediterranean and European theaters during World War II (WWII) having led the 82nd Airborne Division and later, the XVIII Airborne Corps. 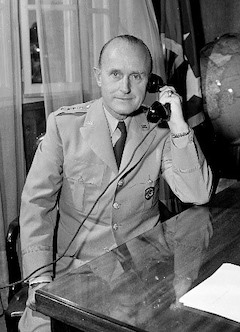 General Alfred M. Gruenther, USA, who had served both Generals Eisenhower and Ridgway as the SHAPE Chief of Staff, was appointed as the second USCINCEUR on 11 July 1953. He had served in a similar capacity during WWII as Eisenhower’s Deputy Chief of Staff in London in 1942-1943, and as General Mark Clark’s Chief of Staff for the Fifth Army and later 15th Army Group in the Mediterranean Theater through the end of the war. After retiring in November 1956, Gruenther served as president of the American Red Cross from 1957-1964. 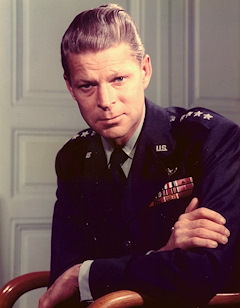 General Lauris Norstad, USAF, who had been serving as the Air Deputy to SACEUR since July 1953, and was appointed as the third USCINCEUR on 26 November 1956. He would be one of USEUCOM’s longest serving commanders with just over six years in the position. During WWII, Norstad had served as operations director for the American Twelfth Air Force and later the combined Mediterranean Allied Air Forces from 1942-1943 before returning to the U.S. to serve on the Air Staff for the remainder of the war. He later commanded USAFE from April 1951 to July 1953. 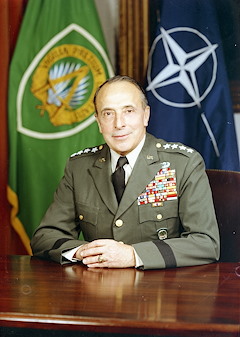 Following a two year tenure as the Chairman of the Joint Chiefs of Staff, General Lyman L. Lemnitzer, USA, assumed command as the fourth USCINCEUR on 1 November 1963. His previous assignments in Europe during WWII included plans and operations officer for the Allied Forces Headquarters staff in London from 1942-1943, and later, as Chief of Staff to the Supreme Allied Commander, Mediterranean and the American theater commander in the Mediterranean from 1944-1945. Later, Lemnitzer served as the Army Chief of Staff from July 1959 to September 1960.

General Andrew J. Goodpaster, USA, who had last served in Europe as commander of the 8th Infantry Division, was appointed as the fifth USCINCEUR on 5 May 1969. During WWII, he fought in North Africa and Italy as a combat engineer before being wounded in January 1944 and returned to the U.S. to work on the Army staff for the rest of the war. He subsequently held several key positions including Director of the Joint Staff from 1966-1967 and as Deputy Commander of the U.S. Military Assistance Command in Vietnam just prior to his appointment to USEUCOM. 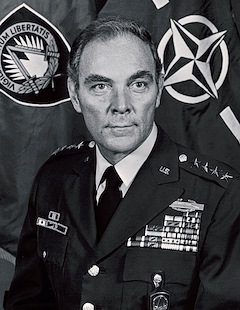 Following several years in key positions with the Nixon and Ford administrations, General Alexander M. Haig, USA, was appointed as the sixth USCINCEUR on 1 November 1974. His previous service in Europe included assignments as the 899th Tank Battalion S-3 and a logistics staff officer with USAREUR. After tours in the Vietnam War with the 1st Infantry Division, Haig went on to special assignments, including a tenure at West Point, serving as the Military Advisor to the National Security Advisor, and a brief period as the Army Vice Chief of Staff. 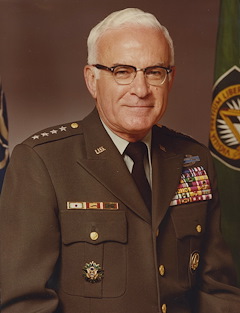 After serving three years as the Army Chief of Staff, General Bernard W. Rogers, USA, assumed command as the seventh USCINCEUR on 27 June 1979. General Rogers would go on to be USEUCOM’s longest serving commander with an almost eight-year tenure. His previous time in Europe included service with the 24th Infantry Division in Augsburg, West Germany. Later notable assignments included the 1st Infantry Division Assistant Commander in Vietnam, Commandant of Cadets at West Point, and commander of U.S. Army Forces Command. 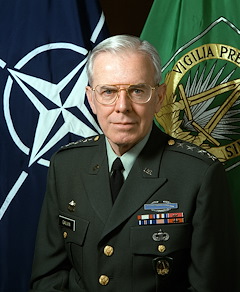 General John R. Galvin, USA, who had served as commander of U.S. Southern Command (USSOUTHCOM) since 1985, was appointed as the eighth USCINCEUR on 25 June 1987. He held a wide variety of command and staff positions during previous periods of service in Europe. In 1973, he began seven years of continuous duty in the European theater in the post of Deputy Secretary of the Joint Staff at USEUCOM. He then moved to SHAPE in Belgium, where he served as a Military Assistant to SACEUR. Galvin later returned to Europe to command the 8th Infantry Division from 1978-1980 and the VII Corps from 1983-1985. 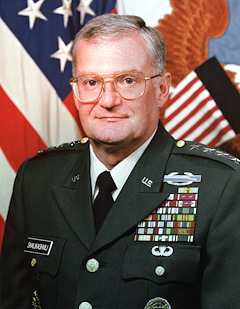 Not long after his tenure in Turkey as the PROVIDE COMFORT commander, General John M. Shalikashvili, USA, was appointed as the ninth USCINCEUR on 23 June 1992. His tenure at USEUCOM would be short lived as President William Clinton appointed General Shalikashvili as Chairman of the Joint Chiefs just over a year later. He had several previous assignments in Europe to include time as the Assistant G-3 for SETAF in Italy, commander of division artillery for the 1st Armored Division in Germany, and as the USAREUR and Seventh Army Deputy Commander. 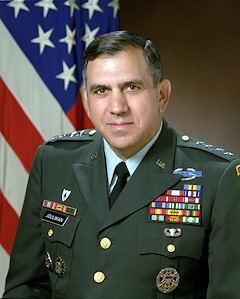 General George A. Joulwan, USA, assumed command as the tenth USCINCEUR on 21 October 1993 after serving as the USSOUTHCOM commander since November 1990. During a total of fourteen years in Europe, he previously served as a platoon leader, company commander, battalion commander, brigade commander, division chief of staff, and the Deputy G-3 for USAREUR. He also served in a joint assignment as special assistant to SACEUR, and later commanded both the 3rd Armored Division and the V Corps during the late 1980s. 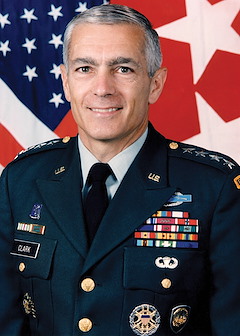 General Wesley K. Clark, USA, was appointed as the eleventh USCINCEUR on 19 July 1997. Earlier in 1995 after a short tenure as the Joint Staff Director of Strategic Plans and Policy (J5), he participated on the diplomatic negotiating team that successfully brokered the Dayton Peace Accords. His first service in Europe included two assignments with the 1st Armored Division based in West Germany from August 1976 to February 1978, one as a battalion S-3 and another as brigade S-3. Just prior to his assignment at USEUCOM, General Clark had served a one-year term as the USSOUTHCOM commander. 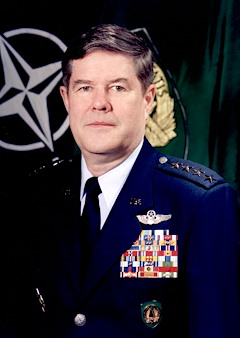 General Joseph W. Ralston, USAF, was appointed as the twelfth USCINCEUR on 2 May 2000. General Ralston was only the second U.S. Air Force flag officer to hold the post. Just prior to his assignment to SHAPE and USEUCOM, he had been serving as the Vice Chairman of the Joint Chiefs of Staff since April 1996. Although never formally assigned in the European theater before, Ralston had flown combat missions over Laos and North Vietnam during the Vietnam War and had held a number of key Air Force operational commands. 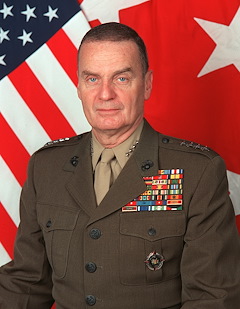 General James L. Jones, the first U.S. Marine Corps flag officer to hold the post, became the thirteenth commander on 16 January 2003. Prior to the latest assignment, Jones had served as the Commandant of the Marine Corps since 1999. Earlier, as commander of the 24th Marine Expeditionary Unit, he participated in Operation PROVIDE COMFORT in Northern Iraq and Turkey. Jones served as the USEUCOM Director of Operations (ECJ3) from July 1992 to July 1994. During this tour of duty, he was detailed to serve as Chief of Staff of JTF PROVIDE PROMISE for operations in Bosnia. During his tenure, the title of the position changed in October 2002 from USCINCEUR to Commander, USEUCOM (COMUSEUCOM). 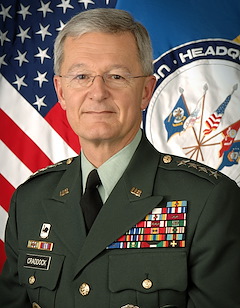 Having already served two years as the USSOUTHCOM commander, General Bantz J. Craddock, USA, assumed command as the fourteenth COMUSEUCOM on 4 December 2006. His previous assignments in Europe included time with the 3rd Armored and 8th Infantry Divisions during the 1980s. In 1998, he joined the 1st Infantry Division in Germany as the Assistant Division Commander for Maneuver. While serving in that capacity, General Craddock was designated as Commander of U.S. Forces for the initial entry operations into Kosovo during JOINT GUARDIAN. In August 1999, he took command of the 7th Army Training Command under USAREUR. 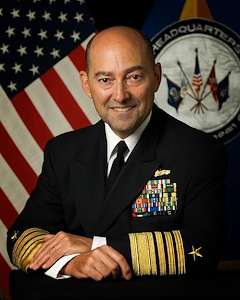 Admiral James G. Stavridis, was appointed as the fifteenth COMUSEUCOM on 30 June 2009, and was the first U.S. Navy flag officer to serve in the position. Like several predecessors, Stavridis had served as the USSOUTHCOM commander from 2006-2009 just before his new European assignment. As a surface warfare officer, he commanded the destroyer U.S.S. Barry from 1993 to 1995. While under his command, the ship directly participated in three distinct Balkans operations in 1994; SHARP GUARD, PROVIDE PROMISE, and DENY FLIGHT. 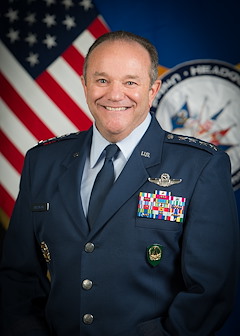 General Phillip M. Breedlove, USAF, who had just assumed command of USAFE the previous July 2012, was appointed as the sixteenth COMUSEUCOM on 10 May 2013. General Breedlove had held several previous assignments in Europe to include as an F-16 fighter pilot at Torrejon AB, Spain and Ramstein AB, West Germany during the 1980s. He later returned to command the fighter wing at Aviano AB, Italy and served in several key leadership positions with USAFE and the Air Staff at the Pentagon to include duty as the Air Force Vice Chief of Staff. 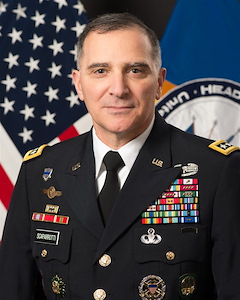 General Curtis M. Scaparrotti, USA, assumed command as the seventeenth COMUSEUCOM on 3 May 2016. His previous assignment in Europe was as a battalion commander under SETAF in Vicenza, Italy from 1994 to 1996. During that time, he led the battalion during their participation in Operations SUPPORT HOPE in Zaire and Rwanda, JOINT ENDEAVOR in Bosnia-Herzegovina, and ASSURED RESPONSE in Liberia. Other key positions held by General Scaparrotti were as the USCENTCOM Director of Operations and the Commander of U.S. Forces, Korea. 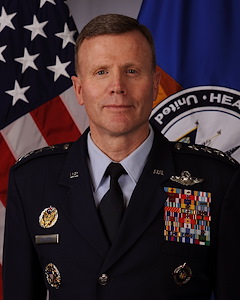 After serving as the USAFE commander since August 2016, General Tod D. Wolters, USAF, became the eighteenth COMUSEUCOM on 2 May 2019. His previous time in Europe included two assignments in West Germany as an OV-10 tactical air support pilot at Sembach AB from 1983-1984 and as an F-15 air superiority fighter pilot at Bitburg AB from 1987-1989. Other key assignments for General Wolters included two senior leader tours in Afghanistan, duty as the air component commander for USSOUTHCOM and as Joint Staff Director of Operations.