June: The Dawn of an Expeditionary Era

The end of the Cold War over 30 years ago seemed to presage a new era of stability across the European continent. Peaceful transitions were taking place in many former communist states. However, such was not the case during the breakup of Yugoslavia, where long-simmering ethnic tensions erupted in a chain reaction of widespread violence. In May 1991, Slovenia and Croatia drafted declarations of independence from the Serbian-dominated Yugoslav federation. Fighting broke out the following month, as then Serbian president Slobodan Milosevic attempted to use force to stop the breakaway republics. Although Milosevic ultimately relented on Slovenia after only ten days of sporadic clashes, the presence of large numbers of ethnic Serbs in Croatia provided the justification for unrelenting conflict. As the violence spread to engulf neighboring Bosnia-Herzegovina, U.S. European Command (USEUCOM) and the North Atlantic Treaty Organization (NATO) were soon called upon to support humanitarian missions and to help restore peace in the region.

Subsequent efforts in the Balkans took shape in several ways and entailed multiple levels of international cooperation and involvement. Initial steps to stabilize the situation came in January 1992 as the United Nations (UN) worked to interject a peacekeeping element between the warring Serbian and Croatian factions. Known as the UN Protection Force (UNPROFOR), it attempted to establish safe zones where civilians could escape the conflict. Although a tentative truce was established in Croatia, fighting soon erupted in Bosnia following its declaration of independence in March. At this stage, every ethnic group found itself under attack and responded by lashing out against the other groups. Amidst the confusing swirl of violence, USEUCOM undertook the first of many operations to come.

On 6 April 1992, the U.S. and the European Community officially recognized the independence of Slovenia, Croatia, and Bosnia-Herzegovina. Despite this international acknowledgement, fighting continued and humanitarian conditions in the Bosnian capital of Sarajevo worsened. Based on a State Department request to help support UN humanitarian efforts, U.S. Secretary of Defense Richard Cheney ordered USEUCOM to undertake a limited airlift of food, medical supplies, and other relief into the beleaguered city. The command turned to the U.S. Air Forces in Europe (USAFE) for this initial mission. From 18-19 April, C-130s from bases in Germany transported supplies from American stockpiles in Italy to Sarajevo and other locations. This effort served as a precursor to a much larger operation to come.

In early May, Serbian-backed forces took control of the Sarajevo airport and cutoff a vital supply route. After lengthy negotiations in June with the warring factions, the UN extended the UNPROFOR umbrella around the Sarajevo airport and other safe havens in the war-torn country. A rapidly deteriorating humanitarian crisis called for a more robust international response. On 2 July 1992, Secretary Cheney directed USEUCOM to undertake a much larger relief mission known as Operation PROVIDE PROMISE. Daily flights of USAFE C-130s commenced the next day to deliver food, medical supplies, and relief cargo to Sarajevo and other sites. USAFE and other U.S. Air Force airlift units took part under a USEUCOM established JTF centered at Rhein-Main Air Base (AB) in Frankfurt. Later in February 1993, Naval Forces Europe (NAVEUR) was handed responsibility for the JTF as the mission expanded to include airdrops into UN safe havens throughout Croatia and Bosnia. The operation would go on to be one of the longest running humanitarian airlifts in U.S. military history to date. By the time it ended on 9 January 1996, PROVIDE PROMISE airlifters had flown 4,533 sorties to deliver 62,802 metric tons of cargo to Sarajevo and other sites. Aircraft from 21 countries also took part in the operation, flying a total of 12,886 sorties to deliver 159,622 tons of food, medicine, and supplies.

While the humanitarian airlift was underway, NATO began to take more direct action to curb the persistent fighting. To help enforce a sequence of UN imposed arms embargoes, the alliance’s standing naval force in the Mediterranean and Atlantic began patrolling international waters off the coast of Montenegro on 16 July 1992 under Operation MARITIME MONITOR. A more aggressive effort was needed to stem the flow of illegal arms into the war zone, which was begun in November as Operation MARITIME GUARD. This mission allowed NATO to use force, and included stopping, inspecting, and diverting vessels bound for the former Yugoslavia. Ships serving with NAVEUR’s Sixth Fleet, such as the aircraft carrier U.S.S. Theodore Roosevelt, took part in the blockade. In June 1993, this operation was subsequently replaced by SHARP GUARD, which sought to consolidate both NATO and other European missions under a single effort. Sixth Fleet ships continued to support this operation until it ended in June 1996 as the situation in the region was beginning to stabilize.

NATO measures to limit the conflict from the sea were also mirrored in the air. The alliance initiated Operation SKY MONITOR in October 1992 to support a UN ban on military flights over Bosnia-Herzegovina, namely by Bosnian-Serb tactical fighters and attack helicopters. This initial effort primarily utilized the NATO Airborne Warning and Control System (AWACS) aircraft to monitor and report on activity in the skies over Bosnia. Because of repeated violations of the no-fly zone, NATO members signaled on 18 December 1992 their willingness to enforce the no-fly zone with military force if requested by the UN. That request eventually came in the following months, and on 12 April 1993 Operation DENY FLIGHT began. 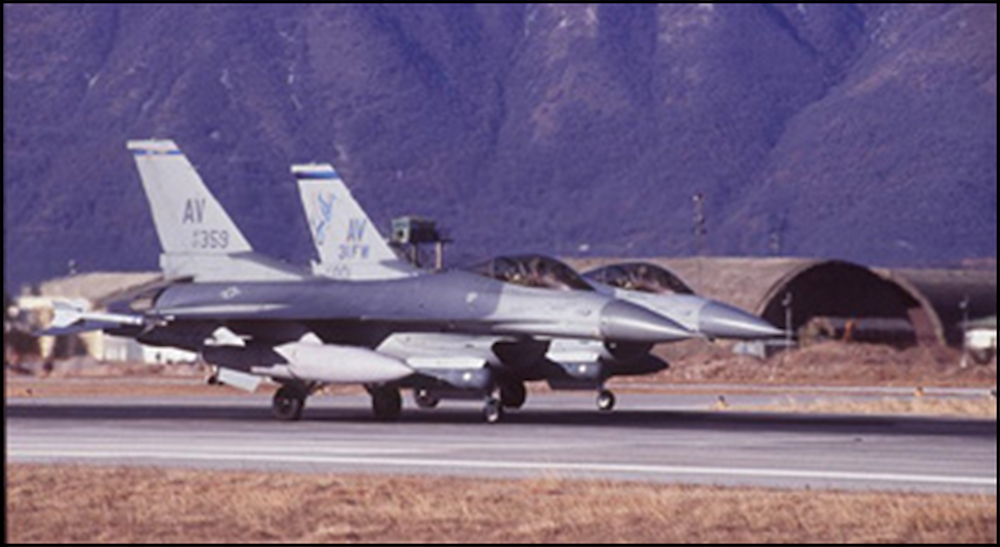 the first NATO combat operation and involved a significant deployment of USAFE aircraft from bases across the theater to those in Italy, like Aviano AB. Nations participating in the operation included, besides the United States, Great Britain, France, the Netherlands, Spain, Turkey, and eventually, Italy and Germany. Although France was not a military member of NATO at the time, it took part because many of its troops served with the UNPROFOR. In addition to USAFE aircraft, Sixth Fleet carriers operating in the Adriatic Sea, such as the U.S.S. America, also supported the operation with their fighters and electronic warfare aircraft. Special Operations search and rescue aircraft provided recovery assistance from Brindisi, Italy, and USAFE air refueling tankers supported many of the NATO flights from other bases in France and Italy. As fighting continued into 1994, the UN and NATO later expanded the mission of DENY FLIGHT to include providing close air support for UNPROFOR and carrying out coercive air strikes against Bosnian-Serb artillery that continued to shell Sarajevo despite continued calls for cease-fires. On a few occasions, DENY FLIGHT fighters engaged and shot down violating aircraft in the no-fly zone.

Despite some successes, DENY FLIGHT was largely unable to quell the war or stop the advances of the intractable Bosnian Serbs, who often shelled areas under UNPROFOR control. Attacks on C-130s and C-141s flying humanitarian missions into Sarajevo also forced the periodic suspension of PROVIDE PROMISE. The most egregious violations occurred in July 1995 when Bosnian Serb forces attacked the UN safe areas of Srebrenica and Zepa and conducted a horrific ethnic cleansing campaign against the local Bosnian populace. NATO responded by drawing the line at Goradze, the most threatened of the remaining UN safe areas. Continued Bosnian Serb actions against UNPROFOR and their attendant safe areas prompted a much stronger response.

On 30 August 1995, NATO air elements began Operation DELIBERATE FORCE after a substantial mortar attack on Sarajevo. This time any restraints on how much force could be employed against the Bosnian Serbs were lifted. Not only were artillery positions, ammunition storage areas, assembly areas, and other military sites around Sarajevo and Gorazde targeted, but strikes all across Bosnia were included in this much wider air campaign. Air strikes continued until 14 September when Bosnian Serb forces agreed to an unconditional cease fire. During the course of the intensive air campaign, NATO and other coalition aircraft conducted over 3,500 sorties and dropped over 1,026 bombs against Bosnian Serb forces. In addition to air strikes, a combined Bosnian-Croatian offensive in early September wrested large portions of Bosnia from Serbian control. At this point, Milosevic and Bosnian Serb leaders relented and agreed to seek a final peace for the long lingering war.

Following the signing of the Dayton Peace Accords at Wright Patterson Air Force Base, Ohio in November 1995, NATO and USEUCOM embarked on a new mission in the war torn region. Designated as Operation JOINT ENDEAVOR, it would involve the deployment of over 60,000 peacekeeping troops that would replace UNPROFOR and work to see that the provisions of the peace plan were carried out. The operation began on 20 December with NATO’s Implementation Force (IFOR) assuming control of UN forces already in Bosnia and continuing their security operations. American troops supporting the effort began moving forward from installations in Germany. The primary U.S. headquarters, staffed by U.S. Army Europe’s (USAREUR) V Corps, was located at Taszar, Hungary, and the lead American element in Bosnia, known as Task Force Eagle, was based at Tuzla. At the peak of the initial deployment, just over 16,000 troops of the 1st Armored Division and other USAREUR units had moved into the area. Airlift and fighter coverage continued to be provided by USAFE units from Ramstein in Germany and Aviano in Italy. This joint force effort constituted one of the largest operations USEUCOM conducted in the immediate post-Cold War period.

The peacekeeping mission in Bosnia would continue under a succession of other names until 2004. There would also be other actions in the Balkans requiring a combined NATO and USEUCOM response, most notably in Kosovo during 1999. Overall, the scope and tempo of these operations represented a major shift for both the alliance and the command. A new expeditionary era had dawned that would come to be a hallmark of operational missions well into the 21st century. It continues to define their shared work and shape their future efforts.