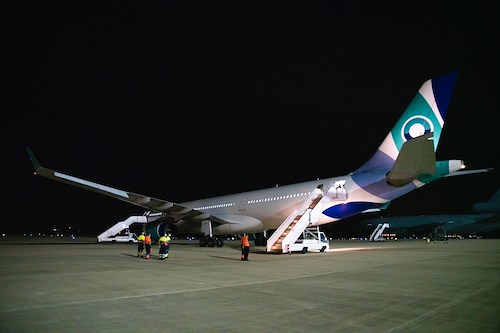 Operation Allies Refuge is the U.S. Department of State’s mission for the evacuation of U.S. citizens, lawful permanent residents, Special Immigration Visa applicants and other vulnerable populations from Afghanistan as quickly and safely as possible. NAVSTA Rota is coordinating with its partners from the Spanish Navy, Spanish Ministry of Defense, and the government of Spain to serve as a transit location for evacuees before their onward movement to the United States and other locations.

“It has been inspiring to see this unified U.S. government effort alongside our Spanish government partners and local volunteers to efficiently process and compassionately care for these evacuees from Afghanistan,” said Joe Bedessem, Chargé d’Affaires ad interim., U.S. Embassy in Madrid. “Only four days after the first plane arrived to Rota, we are able to send more than 350 evacuees on to the United States where they can ultimately settle long term, and we will be sending more on to their final destinations in the coming days.”

The team at NAVSTA Rota has worked nonstop to prepare for and take care of evacuees as part of the ongoing effort throughout the U.S. Central Command and U.S. European Command theaters.

“This first flight of evacuees to the United States is a testament to all we’ve worked for these past few weeks,” said Capt. David Baird, commanding officer of NAVSTA Rota. “It wouldn’t have been possible without our close coordination with the Department of State, other U.S. government agencies, and our Spanish partners.  We are far from done, but together we will see this mission to completion.”

To house evacuees and vulnerable populations from Afghanistan, NAVSTA Rota has designated Liberty Field as a temporary lodging area, with halal dining, religious accommodations, and recreation areas also available. In addition, medical care is provided to assess and assist those with injuries or other medical concerns.

“I don't think I'll ever be able to express the full amount of gratitude we have for our entire community and our Spanish hosts who have poured their hearts and souls into this very important mission,” said Baird. “But probably the best sign of gratitude is displayed in the eyes of the people we have helped.”