U.S. Navy Conducts Interoperability with NATO in the Black Sea

The U.S. Navy and NATO Air Command, conducted the first joint maritime and air training mission in the Black Sea for 2021, Jan. 23, 2021. 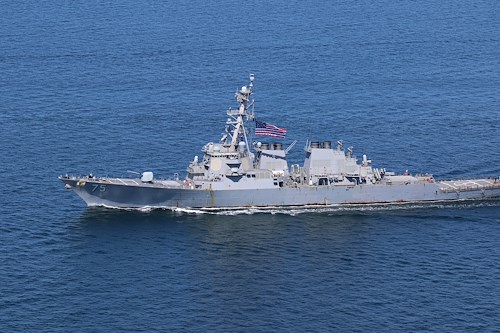 The U.S. Navy and NATO Air Command, conducted the first joint maritime and air training mission in the Black Sea for 2021, Jan. 23, 2021.

Donald Cook began her northbound transit from the Mediterranean Sea to the Black Sea on Jan. 23 to work with NATO Allies and partners in training missions throughout the region.

The training mission is part of an ongoing integration of air and maritime units throughout U.S. European Command area of operations. The ultimate goal is to refine joint air defense procedures to better defend U.S. Navy ships.

Participants conducted training scenarios to establish air and maritime superiority, which enable freedom of navigation in all international waters and airspace.

"As I observed our combat watchstanders, I was impressed with the crew's growing familiarity with NATO joint interoperability procedures, readiness to cooperate with friendly units, and excitement to perfect our tactical proficiency by real-world application," said Cmdr. Matthew Curnen, commanding officer of USS Donald Cook. "This is exactly what we train for, and the opportunity to perform alongside allied surface and air assets is rewarding."

The Black Sea is a critical waterway for maritime commerce and stability throughout Europe. The U.S. Navy routinely operates in the Black Sea to work with our NATO Allies and partners, including Bulgaria, Georgia, Romania, Turkey, and Ukraine. It is in the world’s best interest to maintain a stable, prosperous Black Sea region and deter aggressive actors who seek destabilization for their own gain.

The U.S. Navy and U.S. Air Force routinely operate in the Black Sea consistent with international law, including the Montreux Convention.  The U.S. participation in this joint maritime and air training mission demonstrates the U.S. commitment to working closely with NATO allies and partners to enhance maritime security and stability, readiness, and naval capability.

Donald Cook is one of four U.S. Navy destroyers based in Rota, Spain, and assigned to Commander, Task Force 65 in support of NATO’s Integrated Air Missile Defense architecture. These Forward-Deployed Naval Forces-Europe ships have the flexibility to operate throughout the waters of Europe and Africa, from the Cape of Good Hope to the Arctic Circle, demonstrating their mastery of the maritime domain.

VP-46 is currently forward deployed to the U.S. Sixth Fleet area of operations and is assigned to Commander, Task Force 67, responsible for tactical control of deployed maritime patrol and reconnaissance squadrons throughout Europe and Africa.

U.S. Sixth Fleet, headquartered in Naples, Italy, conducts the full spectrum of joint and naval operations, often in concert with joint, allied, and interagency partners in order to advance U.S. national interests and security and stability in Europe and Africa.