This year was a challenging one for many organizations around the world. Remaining operationally ready while combatting a pandemic was the top priority for U.S. European Command (USEUCOM). 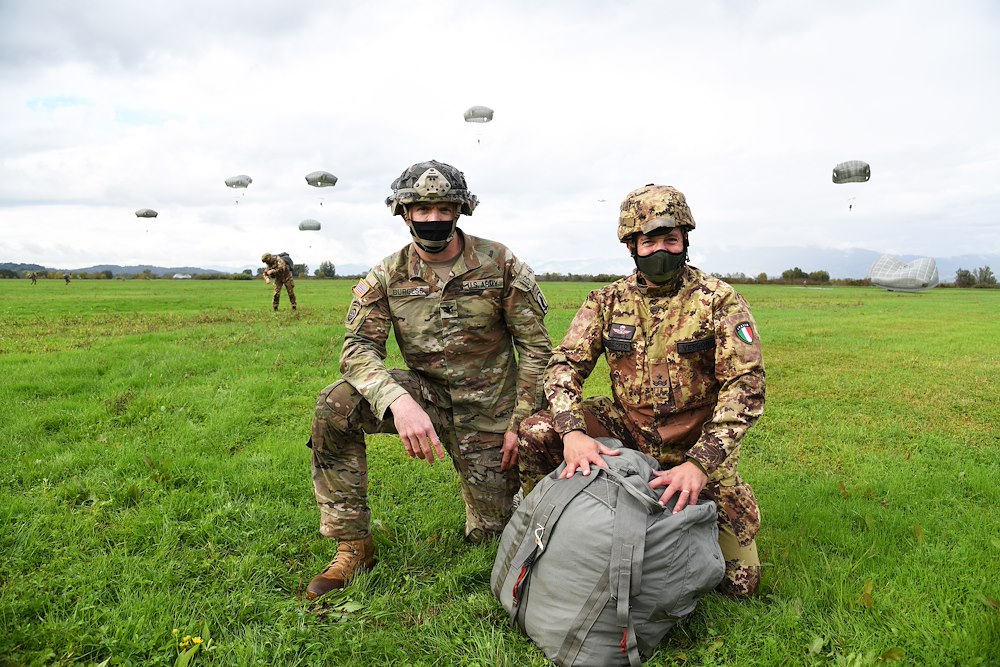 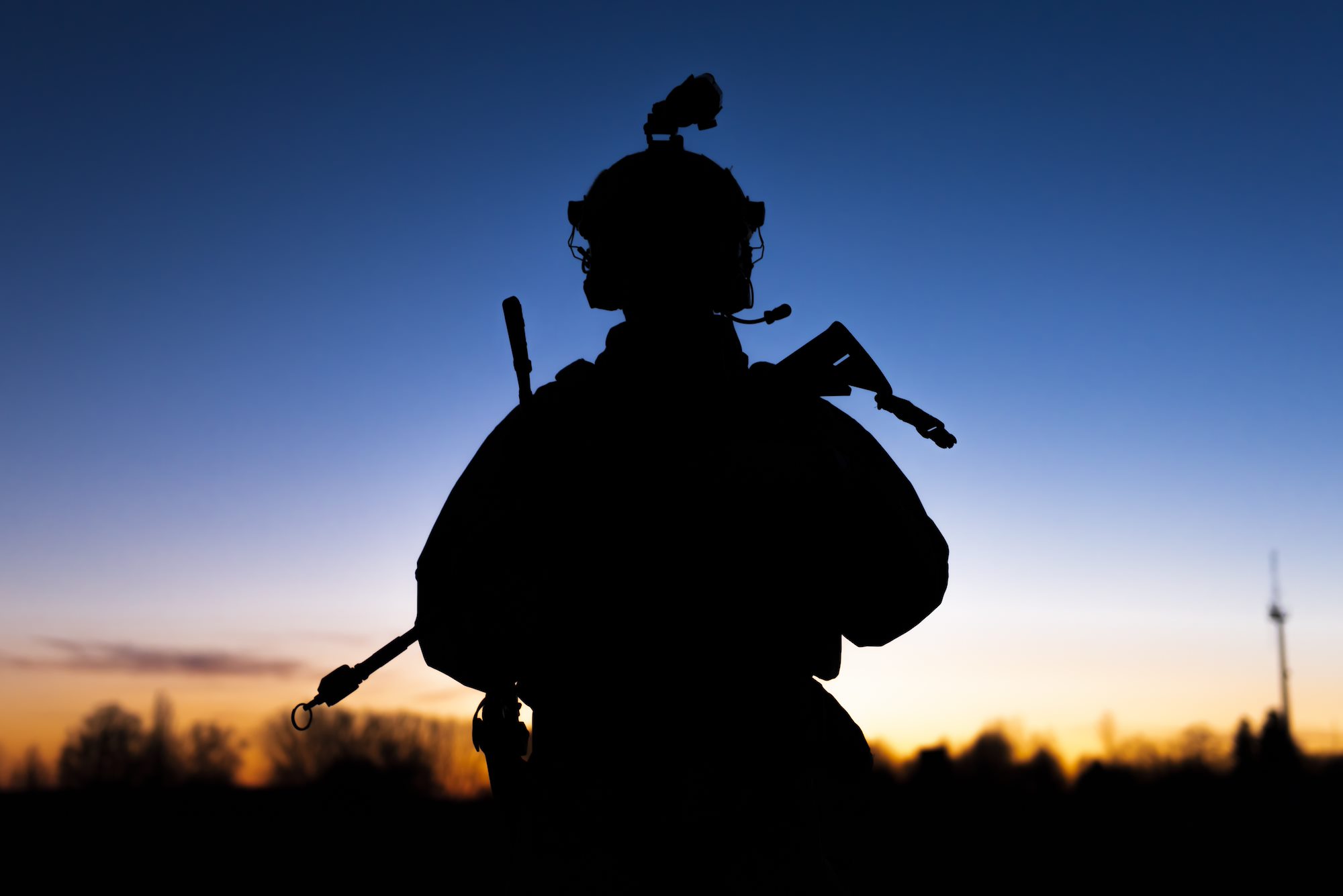 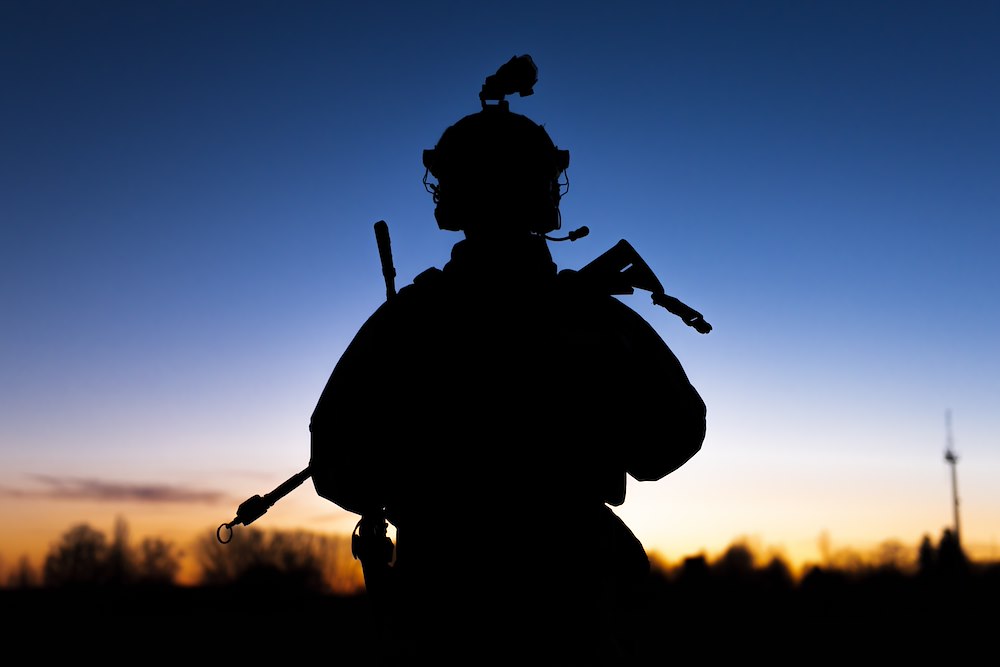 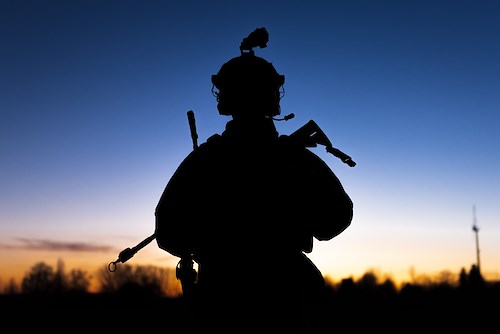 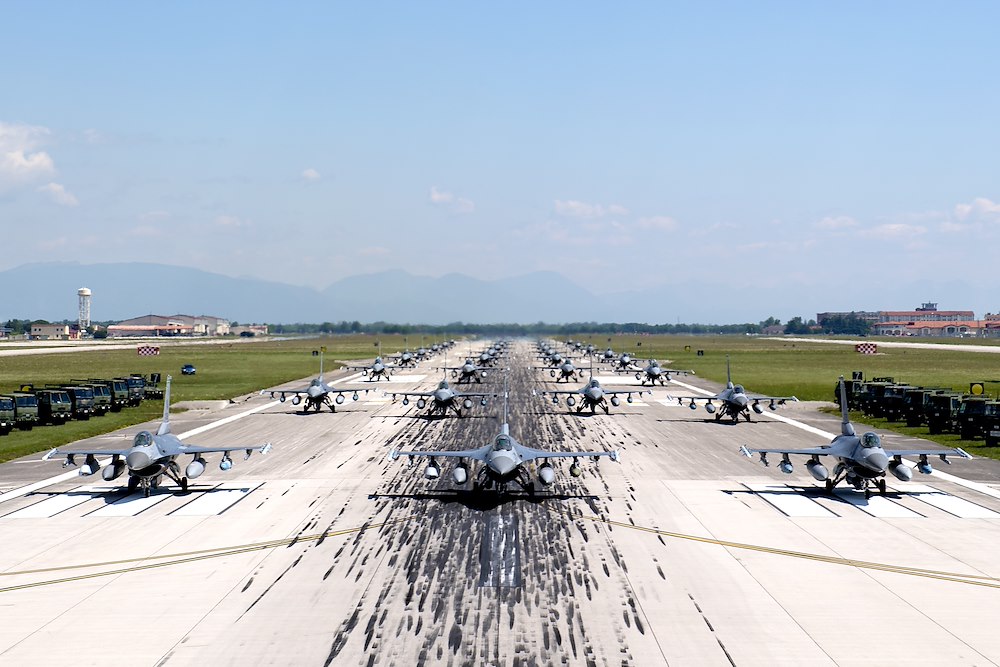 U.S. Air Force aircraft and vehicles assigned to the 31st Fighter Wing (FW) line the runway during an elephant walk at Aviano Air Base, Italy, June 1, 2020. Despite the restrictions in place due to COVID-19, the 31st FW remains lethal and combat ready, prepared to deter or defeat any adversary who threatens US or NATO interests. (U.S. Air Force photo by Staff Sgt. Kelsey Tucker)
Share:
Download image
Photo by: Staff Sgt. Kelsey Tucker 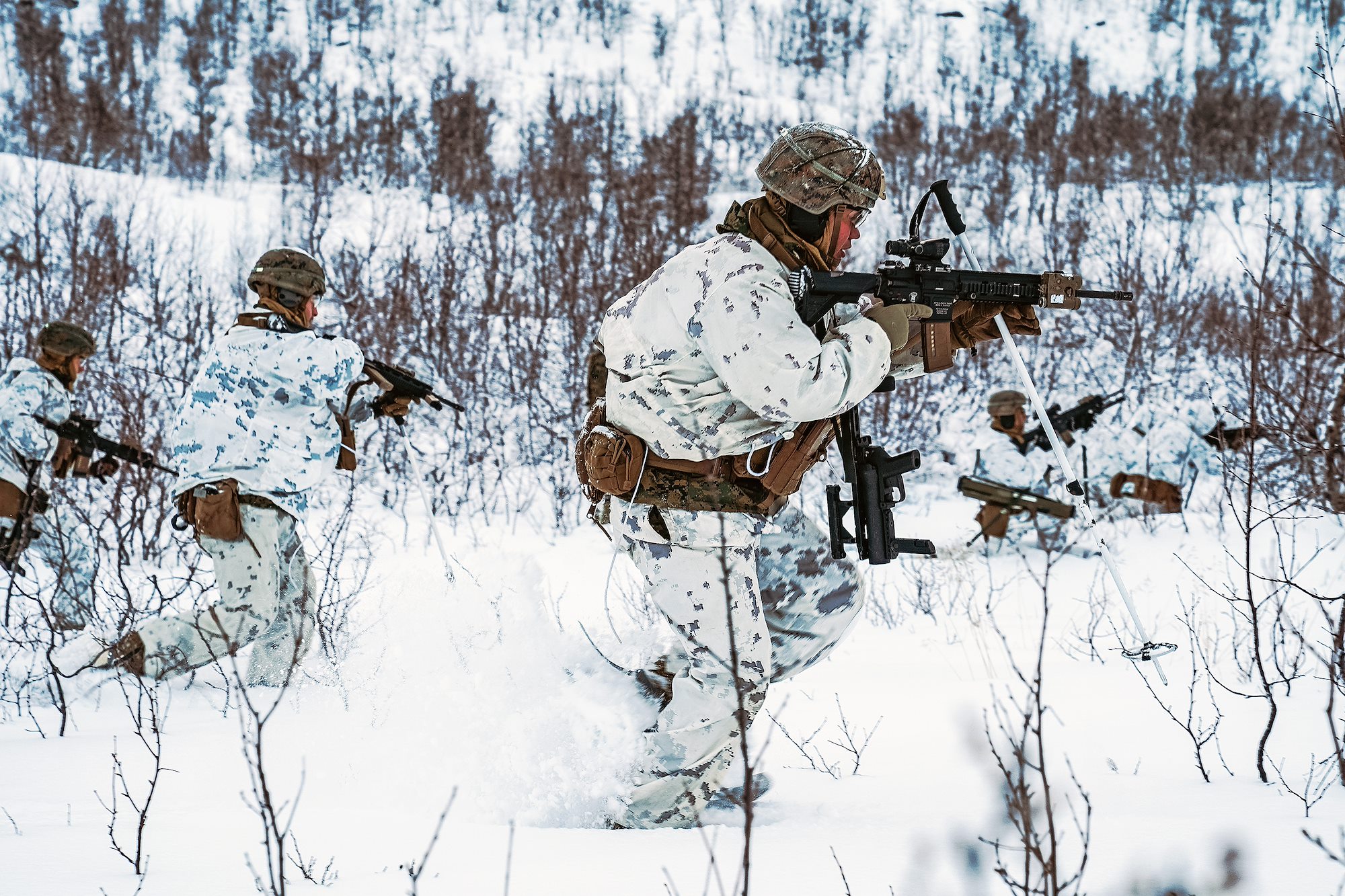 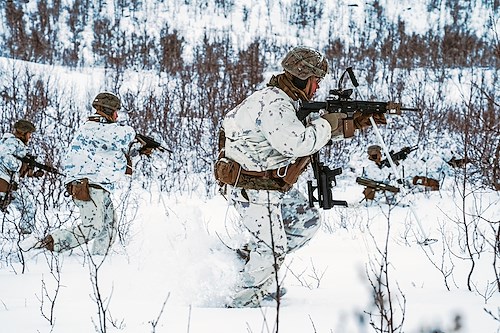 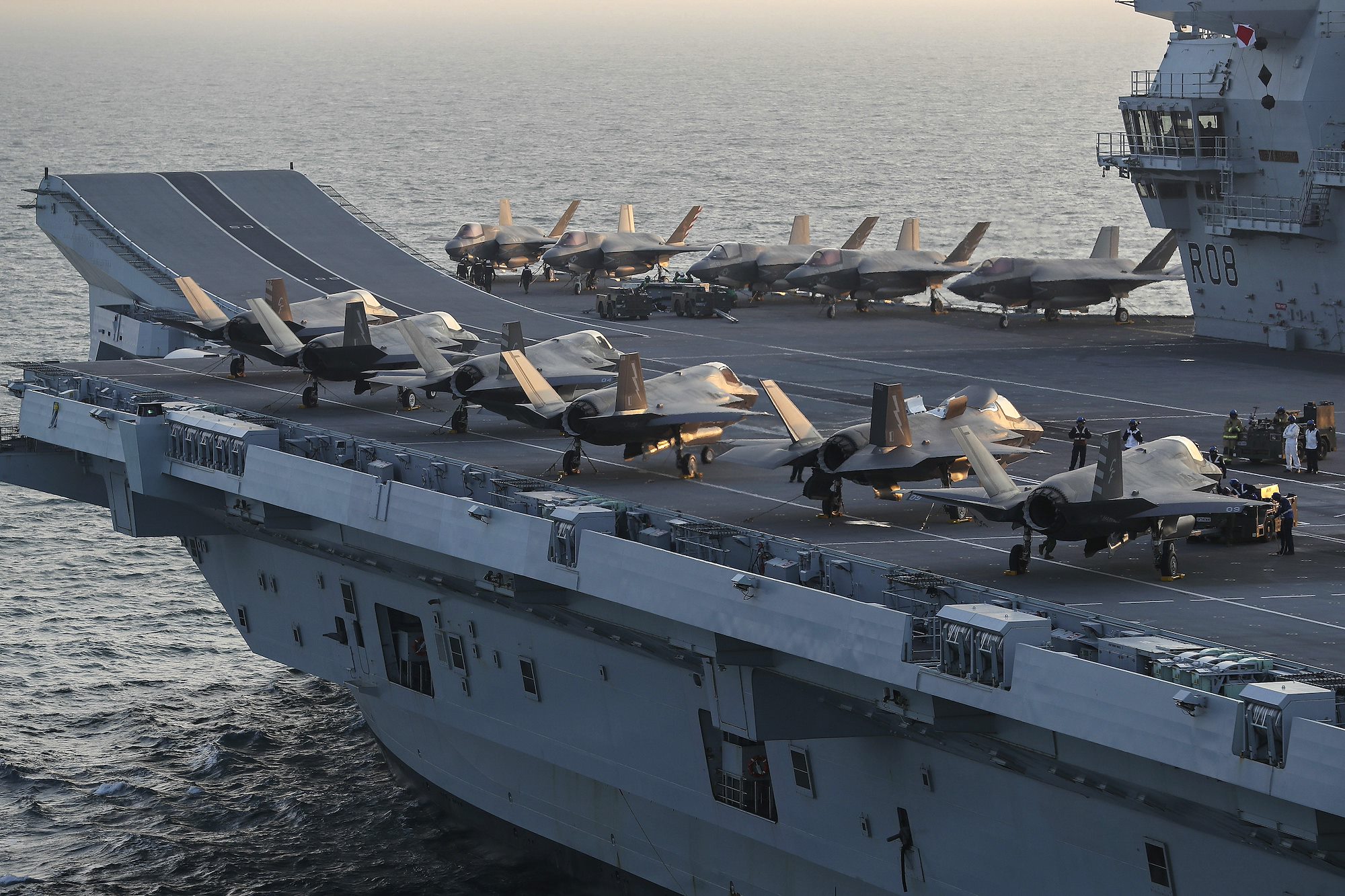 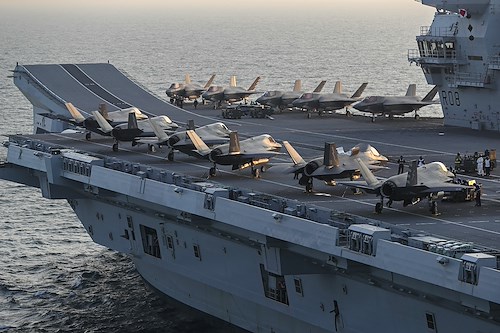 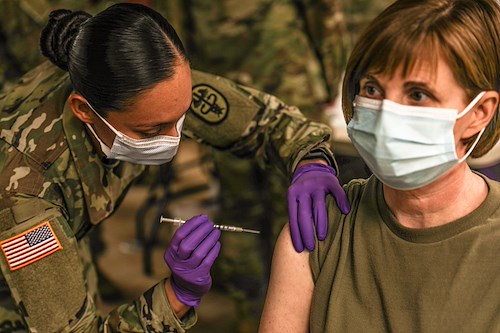 Staff Sgt. Brenda Collins, medical specialist, from Carl R. Darnall Army Medical Center administers the COVID-19 vaccination to a patient during the phase one process Dec.15, 2020 at on Fort Hood, Texas. Distribution of the vaccine will be conducted in phases based on CDC guidance. The vaccine is stored and distributed under various controls to ensure the safety of the recipient.
Share:
Download image
Photo by: Staff Sgt. Desmond Cassell

This year was a challenging one for many organizations around the world. Remaining operationally ready while combatting a pandemic was the top priority for U.S. European Command (USEUCOM). From conducting combat-ready exercises to virtual outreach events, USEUCOM demonstrated its iron-clad commitment to NATO Allies and partners.

Maintaining proficiency at every level across all domains - air, sea, land, space and cyber – remained essential while addressing public health needs according to both U.S. Department of Defense and host-nation guidance. With approximately 70,000 personnel assigned across the 51-country area of operations, USEUCOM personnel met the mission.

“During 2020, we maintained a comprehensive focus on great power competition and international terror groups.  Our operations, activities, and investments continue to center on maintaining peace and deterrence throughout the Euro-Atlantic area,” said Gen. Tod D. Wolters, USEUCOM commander, during a recent virtual all-call session with USEUCOM personnel.

Wolters emphasized the necessity of maintaining warfighting readiness and posture, regardless of the environment, stating, “Our team, in concert with Allies and Partners, has displayed outstanding discipline, over the past nine months.  We must keep our foot on the accelerator and ensure this pandemic is not permitted to become a security issue.”

Demonstrating flexibility and resiliency when the COVID-19 virus erupted into a global pandemic in March, USEUCOM personnel coordinated support to Allies and partners, and adapted training and exercise programs to maintain its fighting edge despite the virus.

“The versatility and resilience of our forces and the militaries of our European Allies and partners are undeniable,” said U.S. Army Brig. Gen. Richard Lebel, USEUCOM’s deputy director of operations. “While we smartly and deliberately take all necessary health protection measures to protect our forces and the communities in which we operate, our commitment to remain ready, relevant and responsive never wavers.”

U.S. European Command programmed almost $22 million in COVID response support to Allies and partners across 23 countries, above and beyond ongoing humanitarian assistance, as part of the U.S. Government's multimillion-dollar support to European nations. The command delivered donations to critically affected communities, as well as national-level health systems, to mitigate pandemic impact during the crisis.

Assistance projects included donation of a new ultrasound machine to a clinic in North Macedonia’s capital city of Skopje, which serves as the country’s primary government-run medical facility to treat COVID-19 patients.

Other projects included donation and delivery of nearly 23,000 pairs of disposable latex gloves and 1,000 liters of hand sanitizer to protect Latvia’s children against COVID-19 as students completed year-end academic testing; a donation of $336,000 in medical supplies to aid recovery of local communities in Italy’s Campania Region, and several other deliveries of personal protection equipment for first responders and medical workers.

“For U.S. European Command, coming to the aid of our Allies and partners to fight this pandemic was as straightforward a decision as bringing our forces to bear to protect and defend any of the 51 nations across the theater,” said Simpson.

Operational and exercise highlights included the largest movement of U.S. personnel into Europe in decades as part of Exercise Defender-Europe 20. Despite modifications due to the pandemic, the Army was still able to move more than 6,000 troops from the U.S. mainland to take part in the exercise. In Poland, Exercise Allied Spirit, linked to Defender-Europe 20, featured nearly 4,000 U.S. personnel joining approximately 2,000 Polish soldiers in a bilateral exercise.

While some exercises were canceled or modified, USEUCOM demonstrated its unique capability to perform under any circumstances by, with and through steadfast partnerships and strong alliances with European host-nations.

Reaching a variety of milestones, U.S. Air Force B-52s flew over every NATO nation in one day demonstrating deterrence and strength with Allied nations and partners. In a separate achievement, all three bombers (B-1, B-2, B-52) returned to the European theater and executed a mission together alongside NATO Allies.

Whether commemorating anniversaries of historic events, such as the 75th anniversary of Victory in Europe Day, or recognizing North Macedonia as the 30th nation to join NATO, USEUCOM remained relevant, ready and postured to operate alongside NATO Allies and partners.

About USEUCOM: U.S. European Command (USEUCOM) is responsible for U.S. military operations across Europe, portions of Asia and the Middle East, the Arctic and Atlantic Ocean. USEUCOM is comprised of more than 64,000 military and civilian personnel and works closely with NATO Allies and partners. The command is one of two U.S. forward-deployed geographic combatant commands headquartered in Stuttgart, Germany.