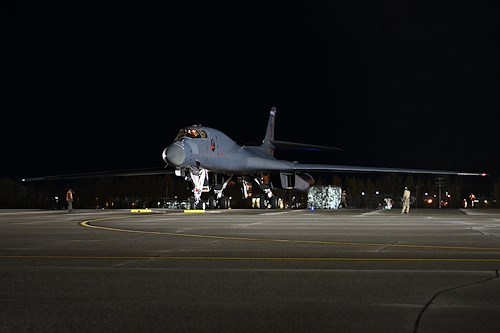 Immediately following the mission over international airspace over the East Siberian Sea, aircraft and crews then deployed to Eielson Air Force Base near Fairbanks, Alaska, landing today, to prepare for another long-scheduled deployment to Europe.

The three Lancers, assigned to the 345th Bomb Squadron at Dyess Air Force Base in Abilene, Texas, demonstrated how U.S. strategic bombers are able to support any mission, anywhere around the globe at a moment’s notice. The mission, which complemented the deployment of six B-52s to RAF Fairford in England, showcased how U.S.-based assets can be employed to achieve an operational objective on USEUCOM’s eastern and western flanks.

These strategic bomber missions clearly illustrated the U.S. Air Force’s ability to continually execute flying missions and sustain readiness in support of our Allies and partners, regardless of any external challenge, including the ongoing COVID-19 global pandemic and subsequent crisis response efforts.

Continuing coverage of this deployment will be available the USECOM website at https://www.eucom.mil and at: https://www.dividshub.net/feature/bombertaskforceeurope.