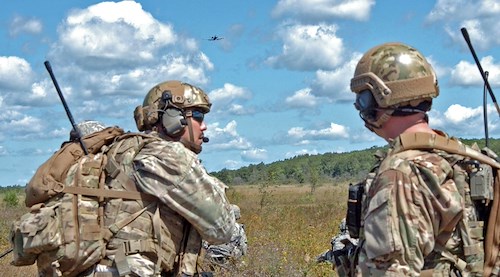 Latvian TACP instructors lead the course, augmented by State Partnership Program (SPP) colleagues from Michigan, Maryland, Pennsylvania, and Lithuania – along with subject matter experts from Poland and France. This course is a knowledge-based academic refresher mandated by the U.S. and NATO JTAC Memorandum of Agreement.

JTACs – defined as qualified service members who direct the action of combat aircraft engaged in close air support and other offensive air operations from a forward position – are a crucial component of a nation’s modern warfighting toolbox.

“The Joint Terminal Attack Controller’s job is to integrate air power with the ground power. They are the nexus for combined fires,” said Col. Andrew Roberts of the Michigan Air National Guard, who was instrumental in the formation of the JTAC partnership in Latvia. “When we started out with the Latvians, a good way to explain it was, ‘Yes, you’re in the Army. Yes, you have this machine gun and that’s great. As a JTAC, your bullet weighs 500 pounds.’ That’s what you’ve got to think about – large impact, highly lethal, very precise ability to take on enemy forces.”

Today, equipment is not always standardized across NATO, although similarities do exist. Conversely, the methods of controlling aircraft and calling strikes into tactical environments must be standardized. This course provides a forum for JTACs from each country to understand how operations are conducted with the additional aim of standardizing techniques, incorporating technological advances, and providing enhanced understanding of air support operations and communication procedures.

Even though this course is conducted in a classroom environment and not in the field, it gives each JTAC the ability to engage with one another, share thoughts on the training, and learn from mutual experience.

“The annual CAS Course offers our NATO JTACS, Joint Fires Observes (JFOs) and aspiring JTACs the opportunity to re-cage their knowledge in a multi-national classroom setting," said Maj. David Dennis, an A-10 Thunderbolt II pilot from the 127th Wing, Michigan Air National Guard. "As the course has matured over the years, it has established itself as a premier education and standardization opportunity that is as deep with experience as it is broad in its understanding of the latest close air support (CAS) tactics, techniques, and procedures."

The course also allows access to Latvia's world-class JTAC training simulator, dually accredited by the U.S. Joint Fire Support executive steering committee and NATO air command. It is able to simulate a wide range of situations and is accredited to replace actual aircraft controls in all weather conditions and day-night operations from various platforms and functions. It also replicates the function of CAS-enabling equipment.

Just as the battleground and mission requirements are ever changing, so are the requirements of the JTAC and TACP. This recertification process helps JTACs continue to improve, which is vital in the theater of operations.

"Close Air Support is an essential part of every Joint Fires kinetic mission. It becomes even more important if one analyses the spectrum of synchronization that requires CAS experts to conduct every step from framing the request to commander's approval and from coordination of all involved agencies down to control of an actual delivery of weapon or an effect," said Lt. Col. Edmunds Svenčs, Latvian combat support branch chief. "The mere fact that in Latvia this time there are over 50 CAS experts: pilots, planners and controllers creates great deterrence effect. No question that this course equalizes knowledge and experience across more than 8 nations taking part in CAS Course - all speaking same language and performing identical procedures - it is a unity of many into the strength of one organization."

All partners benefit from this course. It enables systematic and progressive development of military capabilities and capacity, providing added value to the training environment for units and countries taking part in the SPP.

“JTAC capabilities give a country like Latvia the ability to fight way above its weight class,” said Maj. Gen. Gregory Vadnais, Adjutant General of the Michigan National Guard. “I brag about Latvia’s JTACs all the time. They’ve got real deterrent, real fighting capability.”

The SPP evolved from a 1991 U.S. European Command decision to initiate the Joint Contact Team Program in the Baltic Region with reserve component soldiers and airmen. With a subsequent National Guard Bureau proposal that paired U.S. states with three nations from the former Soviet Union, the SPP was created, becoming a key U.S. security tool that facilitates cooperation across international civil-military affair and fosters relationships at all levels.

Latvia and Michigan were the first official partnership established under the State Partnership Program umbrella with an agreement signed on April 27, 1993. This year marks the 25th Anniversary of that partnership.

“Without our state partnership, this course may not even be possible,” said Maj. Armands Rutkis, TACP commander of the Latvian Land Force Infantry Brigade Combat Support Battalion. “If I didn’t know Lt. Col. Bart Ward [a Michigan Air National Guard subject matter expert] it would be very difficult to make this happen.”

There has been discussion to extend the course with two weeks of academics and a subsequent period of close air support operations in the Baltic region. While there are challenges, the planning, cooperation, and support from partnering states and countries is strong.

“We have over 50 JTACs here from nine different countries, said Rutkis, “so the coordination to make all of this happen will take a lot of planning, but our partnership is growing every day and we are improving each year.”