General David Arthur Burchinal assumed duties as deputy commander in chief (DCINC) of U.S. European Command (USEUCOM) in July 1966. No sooner had he arrived at his new post, when the command quickly received a new mission…to relocate its headquarters out of France and into West Germany. 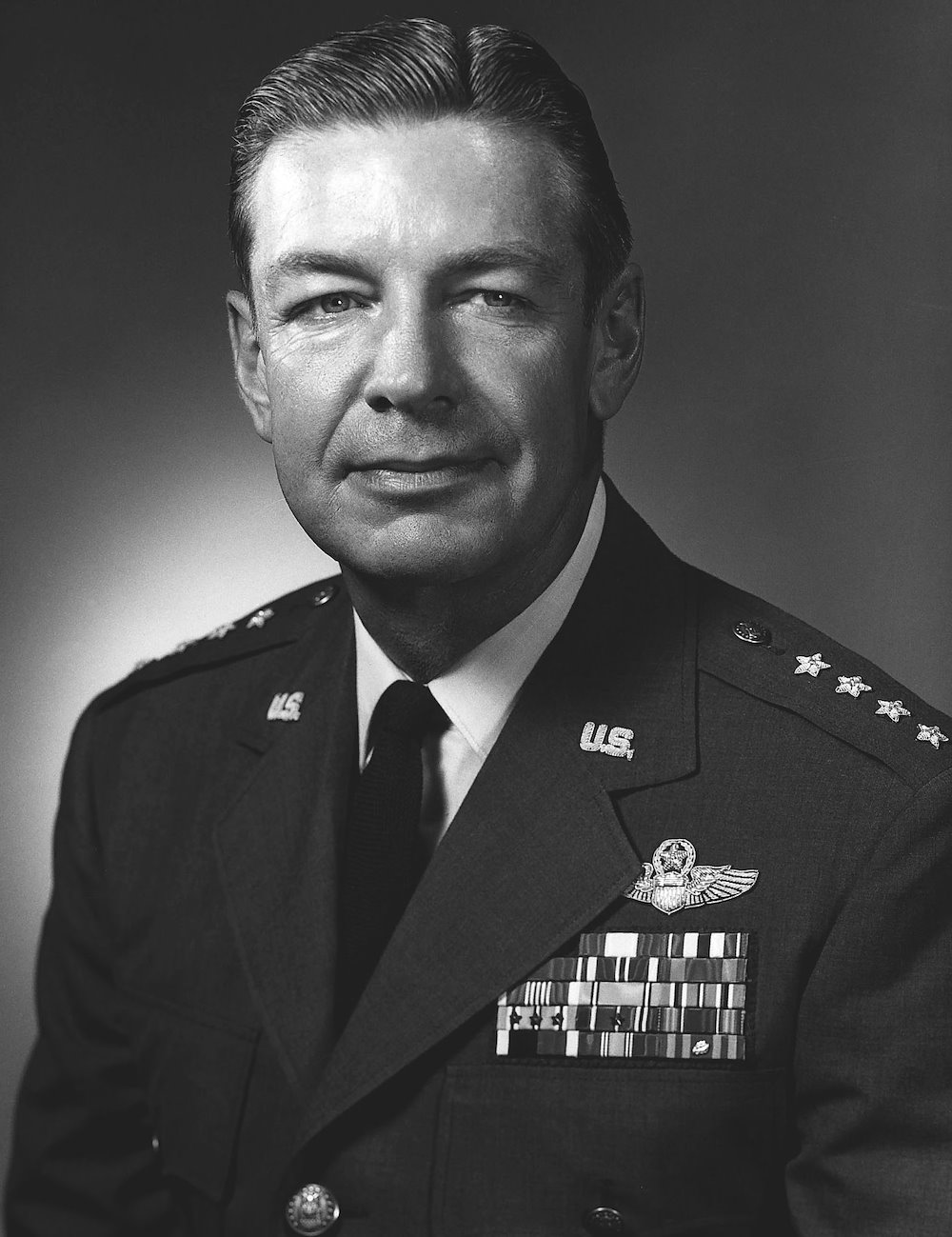 General David Arthur Burchinal assumed duties as deputy commander in chief (DCINC) of U.S. European Command (USEUCOM) in July 1966. No sooner had he arrived at his new post, when the command quickly received a new mission…to relocate its headquarters out of France and into West Germany. This was a huge undertaking and involved moving not only the command staff, but the entire American presence in France out of the country in just over nine months. His 26 years of broad experience at all echelons of the Air Force and recent joint service in the Pentagon gave him the expertise he would need to tackle this monumental task. General Burchinal was definitely the right man at the right time.

First entering the Army Air Corps through pilot training in June 1939, General Burchinal graduated in March 1940. His first assignment was as an aerial observer for Army exercises at Fort Benning, which allowed him to see first hand the importance of branch coordination by a combined arms force. He later became a flight instructor, and later served successively as an engineering officer, test pilot, and assistant adjutant at the San Antonio Air Depot. These early experiences gave Burchinal insights into the training and support of U.S. forces.

In November 1941, he was personally selected to serve as aide to the commander of the Air Service Command, responsible for providing logistical support to the air arm. After the U.S. entered WWII, Burchinal deployed to England to serve as an advisor on combined American and British planning staffs arranging the basing of strategic bombardment forces in the UK and for logistics supporting the late 1942 invasion of North Africa. This was his first invaluable encounter with joint and combined operational planning. 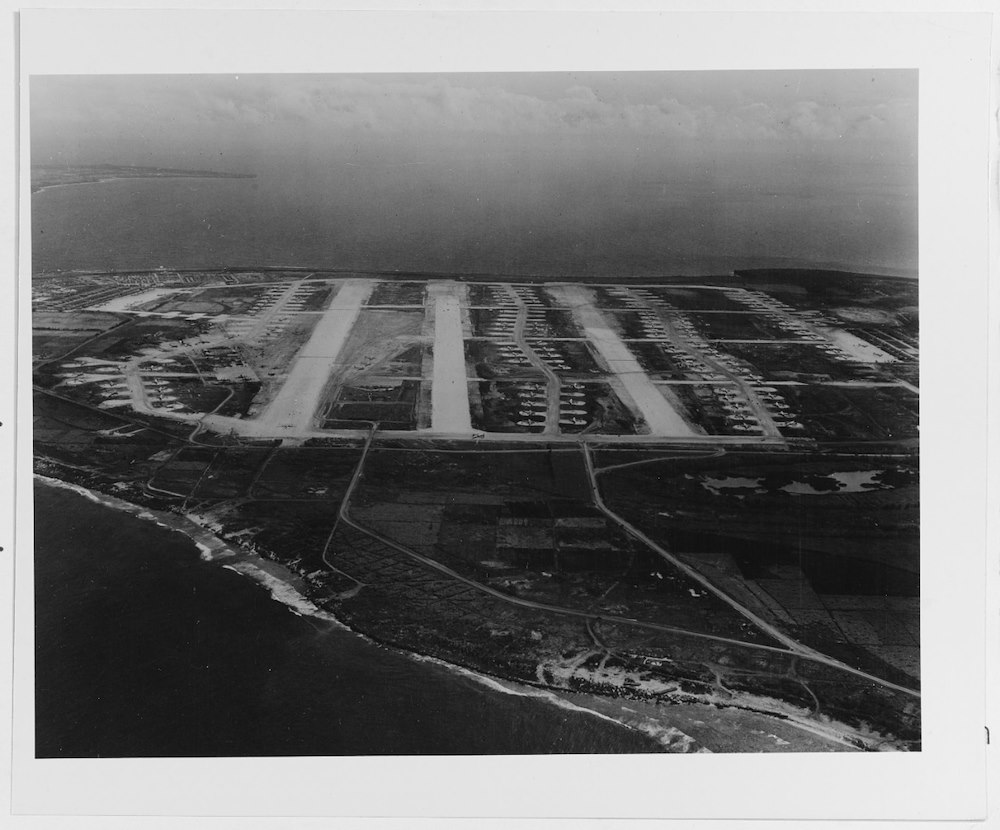 USAAF B-29 bombers on the parking areas of the northern airfield on Tinian, 1945.

Fulfilling his eagerness “to get into the action”, in February 1943, General Burchinal became operations officer and later, deputy commander for a bomb group training for B-24 operations. There he gained a reputation as an innovator and troubleshooter, which earned him a follow-on assignment as an assistant wing A-3 preparing for B-29 operations over Japan. After a brief tenure as air attaché in Canada, Burchinal returned to operations in June 1944 in time to begin the deployment of a B-29 wing to Tinian Airfield in the central Pacific. He personally flew the wing’s first aircraft to Tinian to begin the expeditionary beddown of this new airpower strike force.

Once again, his initiative and hard work gained the attention of superiors and earned him a quick series of promotions as wing and later XXI Bomber Command operations director. In fact, he gained the attention of General Curtis LeMay when he bravely pointed out deficiencies in bomber formations that were effective in Europe but not applicable for B-29s over Japan. LeMay quickly gave him the responsibility for proving new tactics, and later promoted Burchinal as A-3 for all of Twentieth Air Force in September 1945. This experience and service as an analyst on the U.S. Strategic Bombing Survey clearly gave him tremendous knowledge and expertise in the realm of strategic air warfare.

After the war, he moved to Maxwell Field as an instructor on the initial faculty at the Air War College, where he became assistant chief of the air strategy division. Called back to Washington in March 1949, Burchinal served on the Air Staff in several statistical and analysis offices and on the Air Force Council. As with earlier assignments, his time at the Pentagon gained him the attention of superiors and allowed him to garner even more headquarters experience.

In May 1953, he returned to the operational world of Strategic Air Command serving as the commander of two bomb wings and later as chief of staff of Eighth Air Force. As with his earlier service with strategic bombardment, he continued to be a valued member in what was a key deterrence mission during the Cold War.

General Burchinal stepped firmly in the joint arena in November 1958 when he returned to Washington as deputy operations director, J-3, for the Joint Staff. He was later transferred to the Air Staff and advanced to the director of plans in January 1961, and became deputy chief of staff for plans and programs in August 1962. He held this position until February 1964 when he became director of the Joint Staff, and continued to excel and broaden his experience.

When he first arrived at USEUCOM in the summer of 1966, he met the challenging new mission of relocating the headquarters to Stuttgart with energy and ensured it was successfully carried out. At the same time, he bolstered USEUCOM’s position as a true unified command by assuming direct responsibility for all component efforts in Europe and implemented work on an improved command and control center at the headquarters that it had not had before. Today that center is known as the European Plans and Operations Center, which still oversees the command’s day-to-day operations.

During his tenure at USEUCOM, General Burchinal also led the command through difficult periods of force reductions, unrest in the Middle East, and an expansion of the command’s roles in the Mediterranean and Africa. He did all of this while continuing to ensure U.S. forces maintained high degree of readiness for the deterrence of the Soviet Union. When he retired in February 1973, General Burchinal had been at USEUCOM for seven years, the longest serving DCINC in the command’s history.