By road, rail, air and sea, moving military forces and the vast array of equipment and supplies to support them is one of the greatest challenges that U.S. European Command’s (USEUCOM) director of logistics, U.S. Navy Rear Adm. Duke Heinz, and his team confront every day.

Today, our adversaries contest all domains; the environment we operate in negates our historical advantage of homeland sanctuary; and that environment will challenge our ability to project power at will.
By U.S. European Command Public Affairs ,  United States European Command Stuttgart, Germany Feb 19, 2021
View Gallery 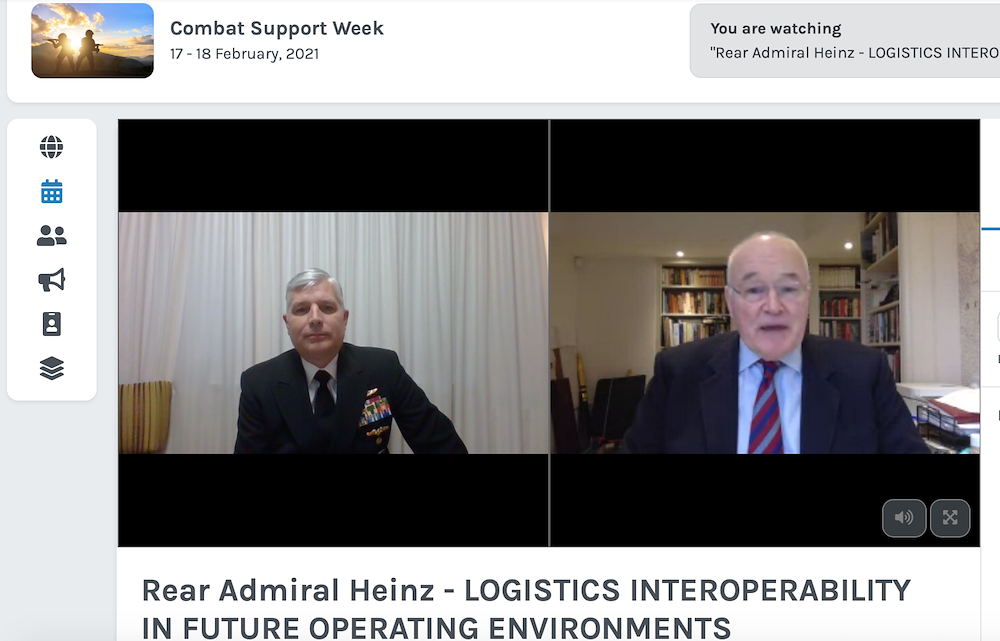 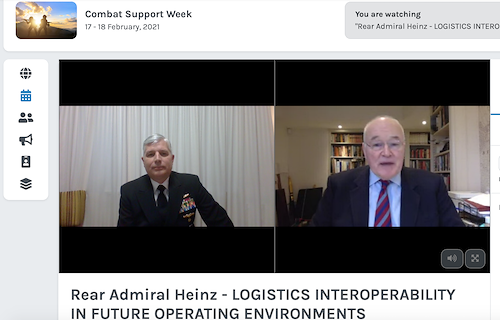 By road, rail, air and sea, moving military forces and the vast array of equipment and supplies to support them is one of the greatest challenges that U.S. European Command’s (USEUCOM) director of logistics, U.S. Navy Rear Adm. Duke Heinz, and his team confront every day. Added to the mix of conducting complex logistical operations across international borders is the constant need for speed – getting troops and tanks, beans and bullets where they urgently need to be as quickly and efficiently as possible.

Joining more than 300 leaders and specialists in military logistics from some 47 nations for two days of intensive, virtual presentations and discussion, Heinz directly addressed those challenges as a featured speaker during the Combat Support Week conference, held Feb. 17-18.

The annual conference, hosted by Defence iQ, serves as a forum for military leaders, technical specialists and industry experts from across NATO to explore the transformation of logistics and engineering.

In his address, “Logistics Interoperability in Future Operating Environments,” Heinz highlighted how new and disruptive technologies will continue to change the character of 21st century warfare. From advanced computing, “big data” analytics and Artificial Intelligence to robotics, directed energy and hypersonics, Heinz explained how remaining at the forefront of these developments is critical to enable the United States and its Allies and partners to meet and defeat future adversaries.

“Unlike in the recent past where we enjoyed uncontested global lines of communications to project and sustain power, along with a robust forward logistics posture, today we face a different environment,” Heinz said. “Today, our adversaries contest all domains; the environment we operate in negates our historical advantage of homeland sanctuary; and that environment will challenge our ability to project power at will.”

Heinz added that the contested environment demands swift adaptability and flexibility to develop new ways to address challenges. Working closely with Allies and partners, USEUCOM has witnessed firsthand during exercises and contingency operations how facing operational challenges serves as a catalyst to increase warfighting readiness. This dynamic has spurred NATO nations to quickly adapt, change collective approaches and develop new means to tackle a wide array of issues.

Heinz joined forces with logistics leaders and military engineers alike from the United Kingdom, Germany, Italy, Spain, Australia and Ireland among other nations to delve into what transformations are required to meet the demands of a peer fight. U.S. Air Force Lt. Gen. Sam Barrett, director of logistics for the U.S. military’s Joint Staff also participated.

Heinz emphasized the critical role military exercises play in honing the logistical capabilities of the U.S. and its Allies and partners. “Only through exercising – notably, joint military exercises – do we build the capacity to respond to crisis, and more importantly, discover where we have collective challenges to overcome,” Heinz explained. “Identifying those gaps, missing capabilities, or perhaps most challenging, where we rely on the same commercial support thus creating critical shortages in times of crisis can be best discovered and then addressed through exercising.”

Heinz highlighted the upcoming spring exercises, especially U.S. Army Europe and Africa’s planned DEFENDER-Europe, which will play host to approximately 30,000 participating forces from 26 nations. The exercise, along with NATO’s Exercise STEADFAST DEFENDER, will feature nearly 8,500 pieces of equipment deploying from the U.S. to 31 training areas located across 14 European nations.

Heinz concluded his remarks noting the importance of NATO as the most significant peace-generating alliance in the world, which has proven to be a credible source of deterrence and will continue to do so in the future.