MLRS software fielding and NET training of the 1st Battalion, 6th Field Artillery of the 41st Field Artillery Brigade in October at US Army Base in Grafenwöhr, Germany. The significance being MLRS returning to USAREUR for the first time in 13 years.

The 1-6 Field Artillery Battalion conducts dry fire missions with mock pods in the training fields at the U.S. Army Base in Grafenwoehr, Germany.
Share:
Download image
Photo by: Kinsey Lindstrom 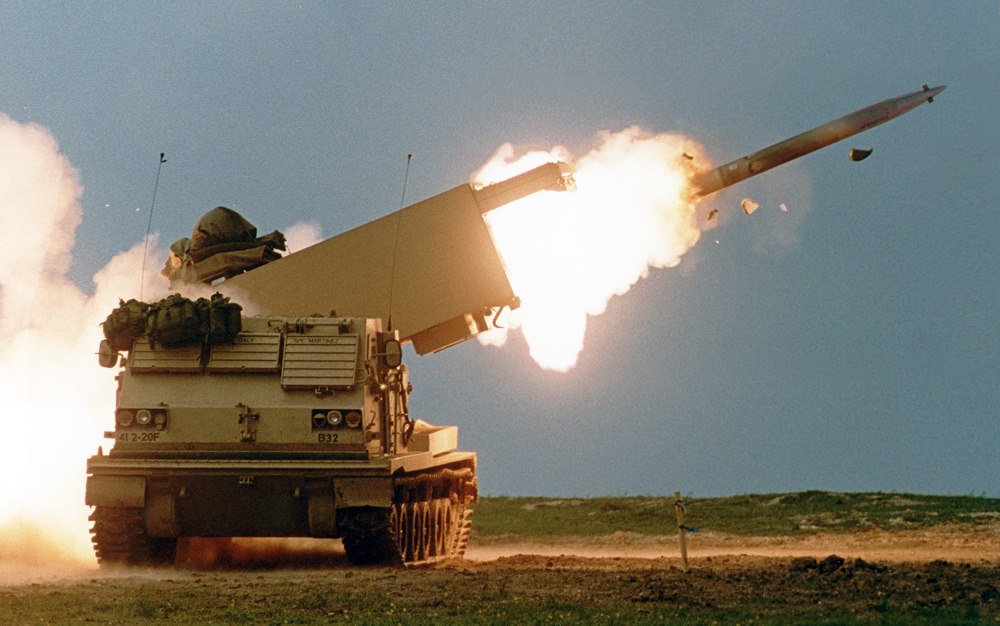 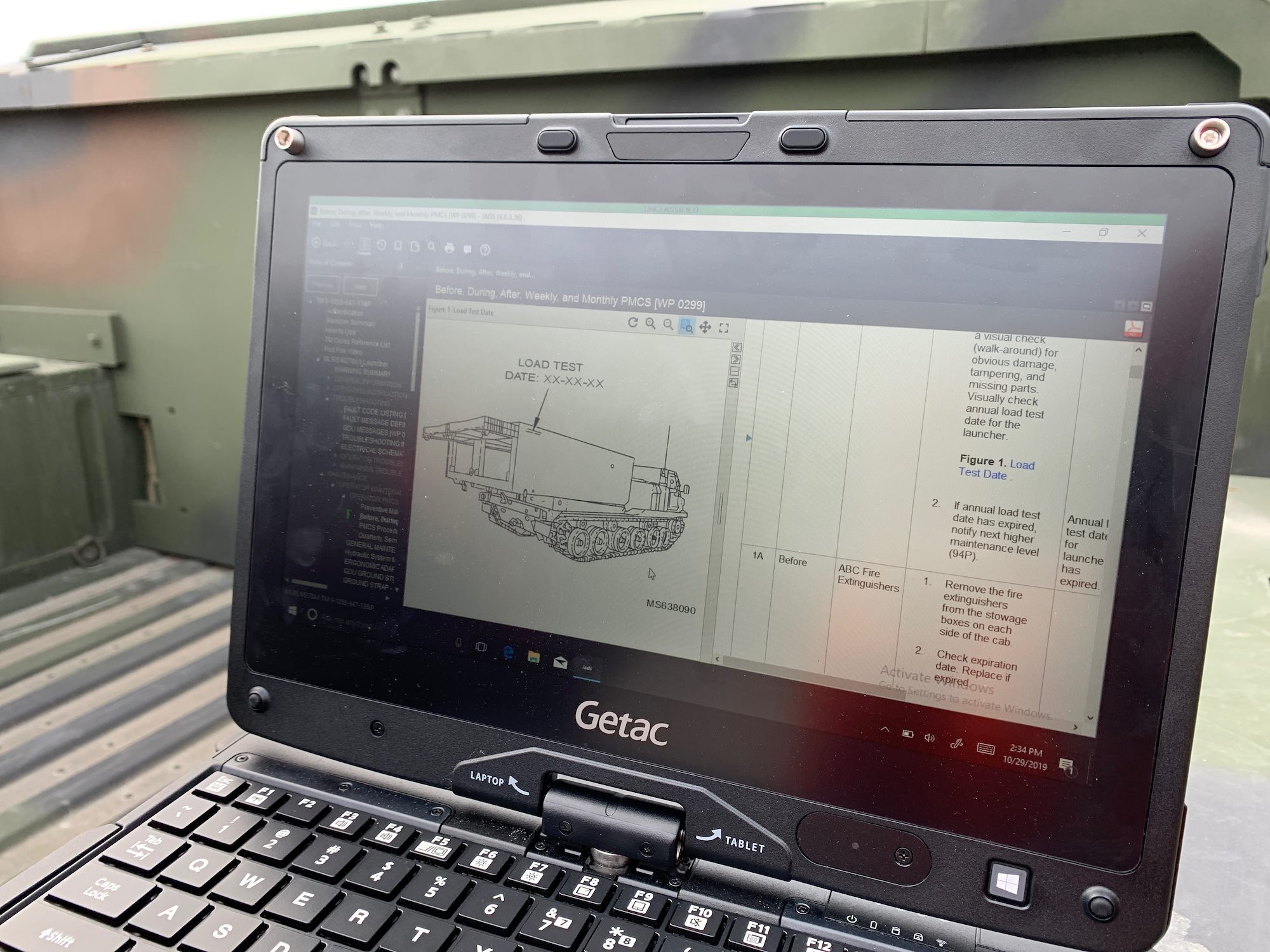 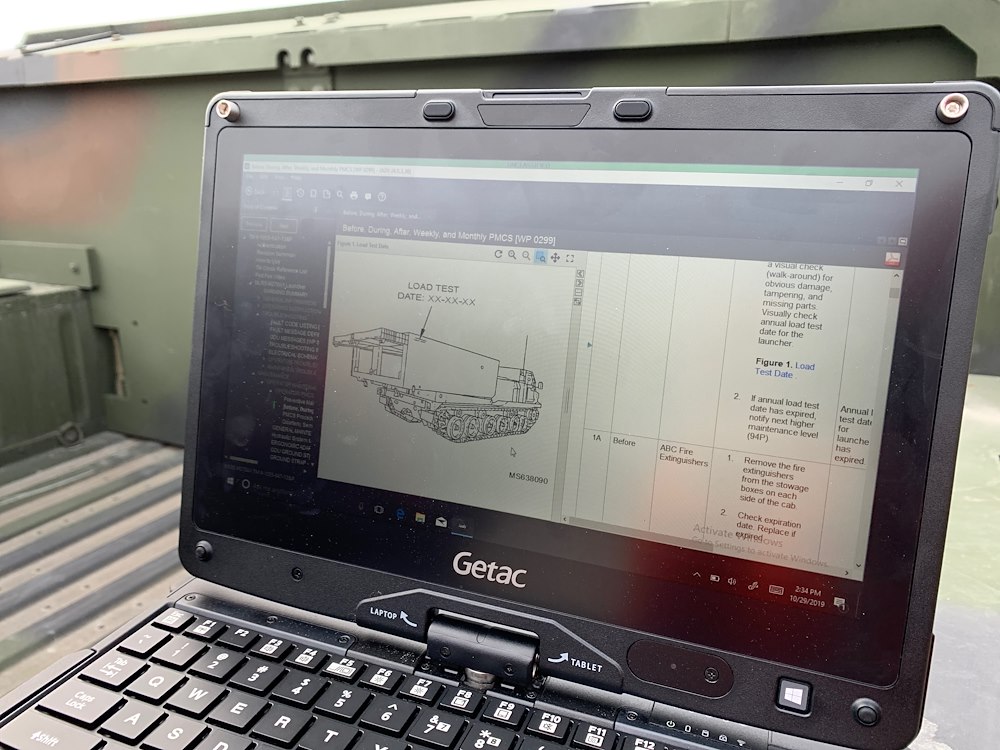 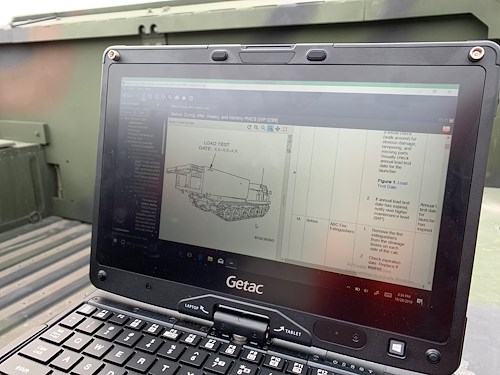 The Electronic Technical Manual replaces the estimated 10 paper manual books and allows the Soldier to quickly search for the information needed while in the field and during combat.
Share:
Download image
Photo by: Kinsey Lindstrom 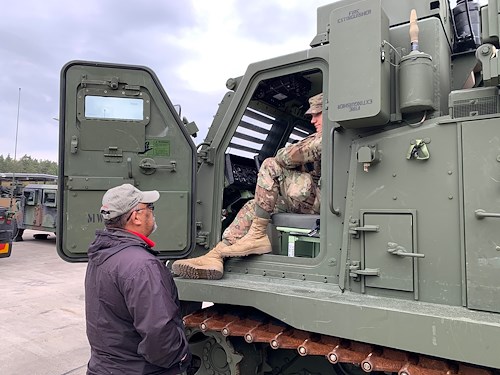 Trainer, checks in with a 1-6 FA Battalion

Paul Lopez, OFT trainer, checks in with a 1-6 FA Battalion 13M who is performing his Preventative Maintenance Check in the motor pool at the U.S. Army Base in Grafenwoehr, Germany.
Share:
Download image
Photo by: Kinsey Lindstrom

U.S. Army Europe reactivated the brigade in November 2018 with the battalion officially reactivating on September 19, 2019. The 1-6 FA is the first of two MLRS battalions within the 41st Fires Brigade. The next battalion, 1-77 FA, is slated to reactivate in fall 2020.

Thirteen years have passed since USAREUR has seen MLRS in its command. The 41st Brigade and the M270A1 MLRS launcher share a battle-tested, long-standing legacy and have served in a combined seven wars. Lieutenant Colonel Angel M. Llompart Monge, 1-6 Field Artillery Battalion commander, is excited to welcome the arrival of the Soldiers along with the launcher’s enhanced capabilities. “The 41st Brigade has a rich history that traces back to World War I,” Lt. Col. Llompart said. “It’s a great opportunity to continue to build on this lineage and let the world know that big Army Europe is back.”

The 1-6 FA is focused on the Army’s number one priority, mission readiness. The battalion leadership has implemented a vigorous training plan with built-in assessments to gauge the readiness and knowledge retention of each Soldier. “As we train like we fight, and as we focus ourselves to train in large scale combat operations, the way that we fight is important.” Lt. Col. Llompart explained. “Being here allows us to train with our allies and partners.”

The training moved at a fast yet practical pace, and by the end of day one, Soldiers had already transitioned to the unit’s motor pool to conduct a Command Post Exercise on their launchers. “The new generation of Soldiers is young, learning new software and systems, and while the information is extensive, they have grown up with technology at their fingertips, catching on quickly to the developments that are rolling out and will continue to be fielded as early as next year,” Mike Murray said, government lead, Operations, Fielding and Training Team, CCDC AvMC S3I, STORM Branch.

The 1-6 FA Battalion training concluded with the launcher platoons in the field, conducting dry fire missions with mock pods. “This training for future operations puts us ahead,” Staff Sergeant Jaksch said, who was reclassified as a Military Occupational Specialties 13M within the 1-6 FA Battalion and arrived to Grafenwoehr in April. “It’s in-depth training that we want and need.” With the 1-6 FA scheduled to conduct its first live fire in January 2020, the Soldiers are eager to exercise their launchers’ systems.

The OFT Team is responsible for conducting all MLRS software fieldings and NET trainings for U.S. Army Active and National Guard, Marine Corps, Foreign Military Sales Partners and Allies. Murray and Alfred “Al” Fraser, contractor lead for the OFT Team, head up the efforts, not only stateside but worldwide. “The training team ensures the new software and hardware demonstrated have not hindered but enhanced the Soldier’s capabilities.” Fraser said. “It’s more than just fielding the launcher, it’s about the weapon, the whole system of systems, teaching employment of the new munition capability, targeting the command and control software change.” With over 200 plus years of combined military and industry experience, most of the 10 OFT trainers were soldiers themselves in an MLRS battalion and directly involved with the launcher modernizations and advancements.

“You take care of the launcher, and it will take care of you,” Paul Lopez, OFT trainer, emphasized to the launcher crews. Lopez has experienced the MLRS weapon system firsthand during his military tenure as a field artilleryman and now teaches NET training to soldiers.The brigade will have ongoing, 24-hour access to the OFT Team as well as the Systems, Modeling, Analysis, Requirements and Test Lab located in Fort Sill, Oklahoma. Jeff Froysland, senior field artillery specialist for MLRS Systems, Training and Doctrine Command, Capability Manager, Field Artillery Brigade, is an integral OFT Team member. “The SMART Lab provides round the clock software support for our Soldiers in all parts of the world,” Jeff said. “When there is a software issue, our team can troubleshoot in real-time to resolve it.” Through the SMART Lab, trainers such as Craig Hammond will typically become deeply embedded within units (long after the face-to-face training) by providing virtual guidance directly to the Soldiers on the battlefield.

The 41st FA Brigade celebrated its one-year reactivation anniversary on Nov. 27, 2019. Its expansion is a direct result of the 2017 National Defense Authorization Act, which directs the Army to increase its numbers worldwide. The next battalion to reactivate, 1-77 FA, will deploy additional soldiers and launchers to USAREUR, requiring the OFT Team to return to Grafenwoehr and field and train the latest System Suite Software Version 7.11b of the MLRS Launcher.

As the 41st FA Brigade continues to grow, the USAREUR is now fully equipped to deliver long range precision fires in support of U.S. Joint and Multi-national Forces and Allies.