Today marks the centennial of U.S. entry into World War I, kicking off a 26-month-long commemoration period in U.S. European Command of U.S. involvement in the Great War that raged across Europe from 1914 to 1918.

STUTTGART, Germany - Today marks the centennial of U.S. entry into World War I, kicking off a 26-month-long commemoration period in U.S. European Command of U.S. involvement in the Great War that raged across Europe from 1914 to 1918.

"The centennial of U.S. entry into World War I offers a historic opportunity to remember and honor the selfless service and sacrifice of all the Americans who came to Europe to fight for peace, liberty and stability in Europe," said Gen. Curtis M. Scaparrotti, the commander of USEUCOM. "While the Great War raged on European soil from 1914-1917, U.S. leaders realized America's security was inextricably tied to European security."

On April 6, 1917, the U.S. officially entered the war. Overall, American forces fought mostly in France - with major involvement in Belgium and England as well as smaller engagements in Italy and Russia.

"A hundred years later, we remain just as committed to our Allies and partners in the collective pursuit of unity and defense," Scaparrotti said. "As we commemorate the centennial of World War I this year and next year, the men and women of U.S. European Command remain engaged, postured and ready to face today's complex and dynamic security environment."

From now until the centennial of the signing of the Versailles Treaty on June 28, 2019, USEUCOM and its Components, U.S. Army Europe; U.S. Air Forces in Europe; U.S. Naval Forces Europe; U.S. Marine Forces Europe; and U.S. Special Operations Command Europe, will participate in a wide array of commemorative activities and events throughout Europe.

U.S. European Command is one of the United States' two forward-deployed Geographic Combatant Commands whose area of focus cover almost one-fifth of the planet, including all of Europe, large portions of Asia, parts of the Middle East and the Arctic and Atlantic Oceans. The command is responsible for military relations with NATO and 51 countries with a total population of close to a billion people. 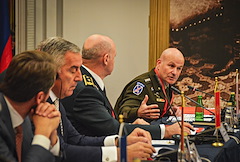