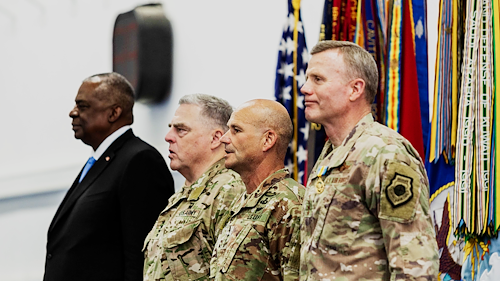 Secretary of Defense Lloyd J. Austin III, presided over the event that took place at Patch Barracks, Germany, where he thanked Wolters for his service during such tenuous times. Wolters served during the command’s two largest crises since the Cold War – Operation Allies Refuge/Welcome with Afghanistan’s non-combatant evacuation and Russia’s unprovoked invasion in Ukraine.

“This team’s historic achievements, especially over the past few months, are a testament to the leadership of your commander, General Tod Wolters,” said Austin. “Together with our Allies and our Partners around the world, you’re meeting Russian aggression with unity, with spine, and with steel.”

During his time as the USEUCOM Commander, Wolters worked tirelessly to maintain interoperability of the 51-country area of responsibility. Leading a forces that swelled to number more than 100,000 Soldiers, Sailors, Airmen, Marines, Coast Guardsmen and Guardians with the responsibility of ensuring seamless shoulder-to-shoulder operations with U.S. Allies and Partners.

In his remarks, Wolters thanked Secretary Austin and Chairman of the Joint Chiefs Gen. Mark A. Milley for their mentorship over the years and thanked the men and women who served under his command for their exceptional service. He also expressed his confidence in Cavoli’s leadership as the new commander.

During the handover, Austin passed the flag from Wolters to Cavoli signifying the transfer of command. Remarking on the exceptional leadership and dedication from both senior leaders, Austin said he was honored to preside over the ceremony and stand among the proud men and women of USEUCOM.

“General Cavoli is exceptionally well-prepared to further strengthen NATO’s posture on its Eastern Flank—and to help forge a truly 21st-century security architecture for Europe,” Austin said. “You are the right leader, with the right experience, at the right time and I have every confidence that you’ll do well.”

Cavoli takes command with vast experience in Eurasia serving as the Director for Russia on the Joint Staff and as a foreign area officer who speaks Italian, Russian and French. He served in variety of positions during his career, most recently serving as the Commander of U.S. Army Europe – Africa in Wiesbaden, Germany.

U.S. European Command (USEUCOM) is responsible for U.S. military operations across Europe, portions of Asia and the Middle East, the Arctic and Atlantic Ocean. USEUCOM is comprised of more than 64,000 permanently assigned military personnel and works closely with NATO Allies and Partners. The command is one of two U.S. forward-deployed geographic combatant commands headquartered in Stuttgart, Germany.