On June 6, 1944, in Operation Overlord, Allied forces landed troops on the beaches of Normandy, France, for the largest amphibious assault in history. Gen. Dwight D. Eisenhower called the operation a crusade in which, “we will accept nothing less than full victory.” 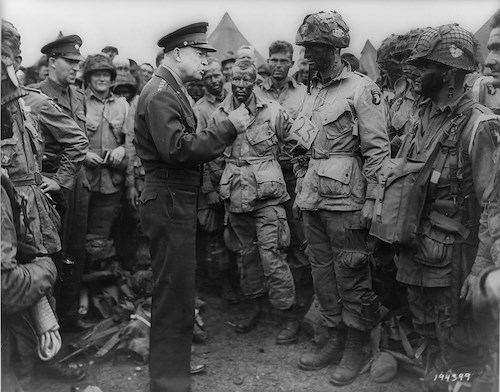 Army Gen. Dwight D. Eisenhower, supreme commander of the Allied Expeditionary Forces in Europe, talks to members of the 101st Airborne Division as they prepare for the massive paratrooper operation that began just after midnight, June 6, 1944, in Normandy. (Photo by U.S. Navy/National Archives)
Share:
Download image
Photo by: 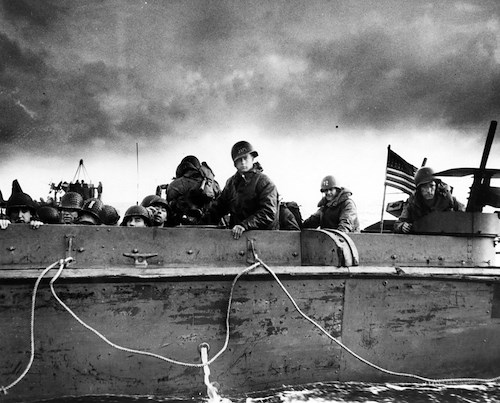 Troops and crewmen aboard a Coast Guard Landing Craft 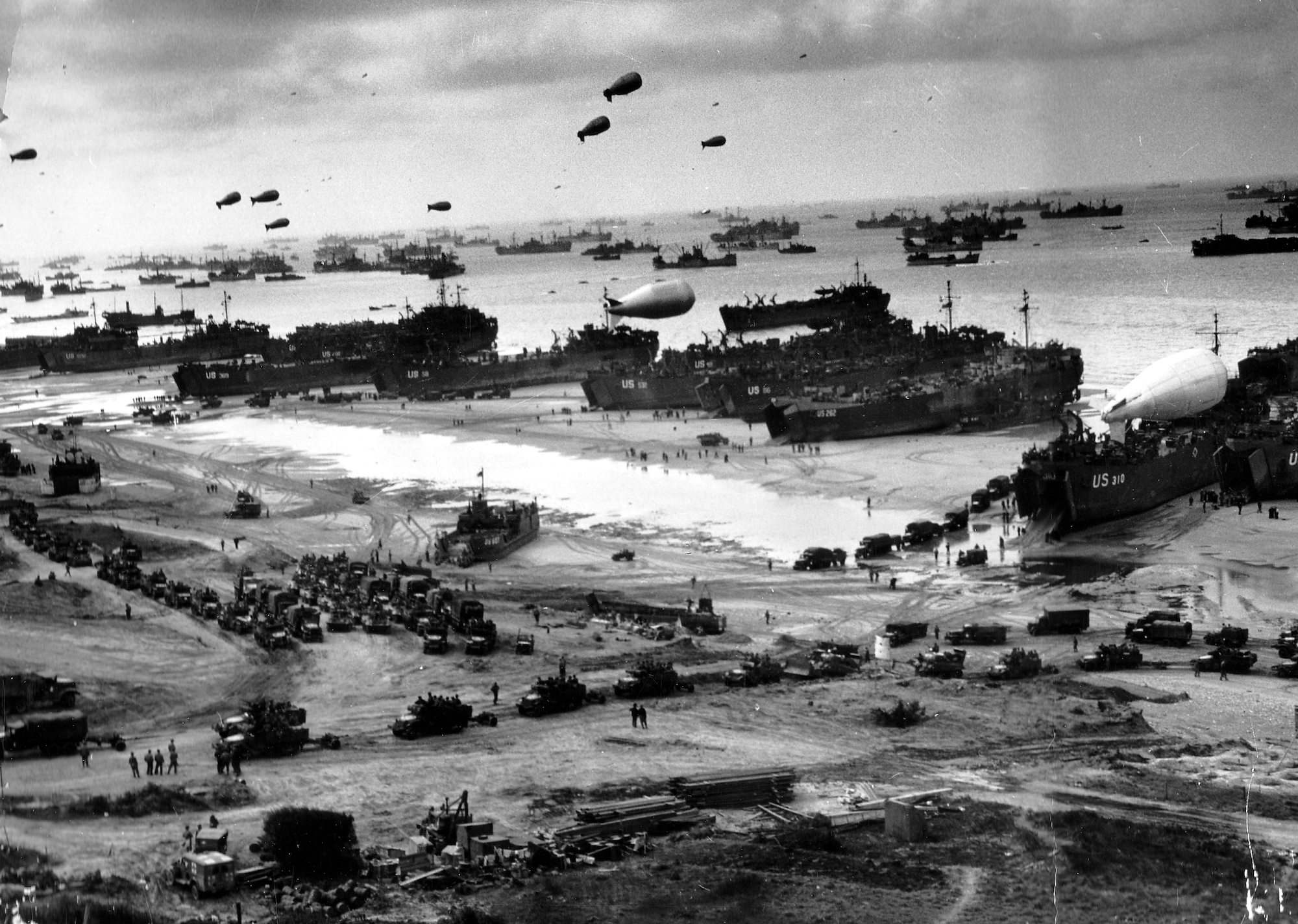 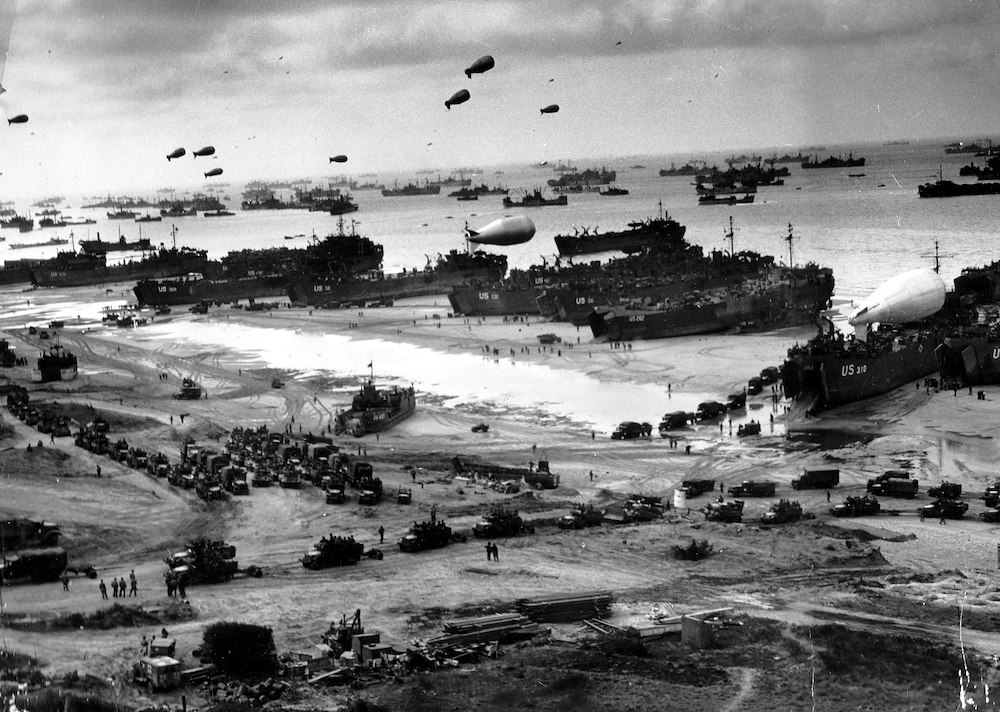 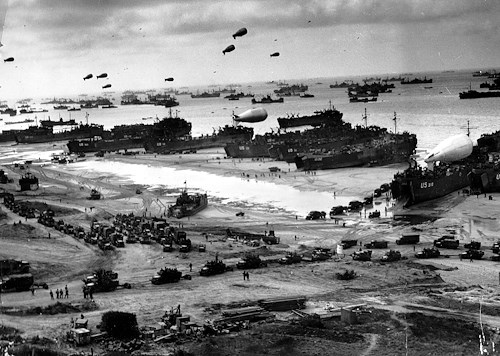 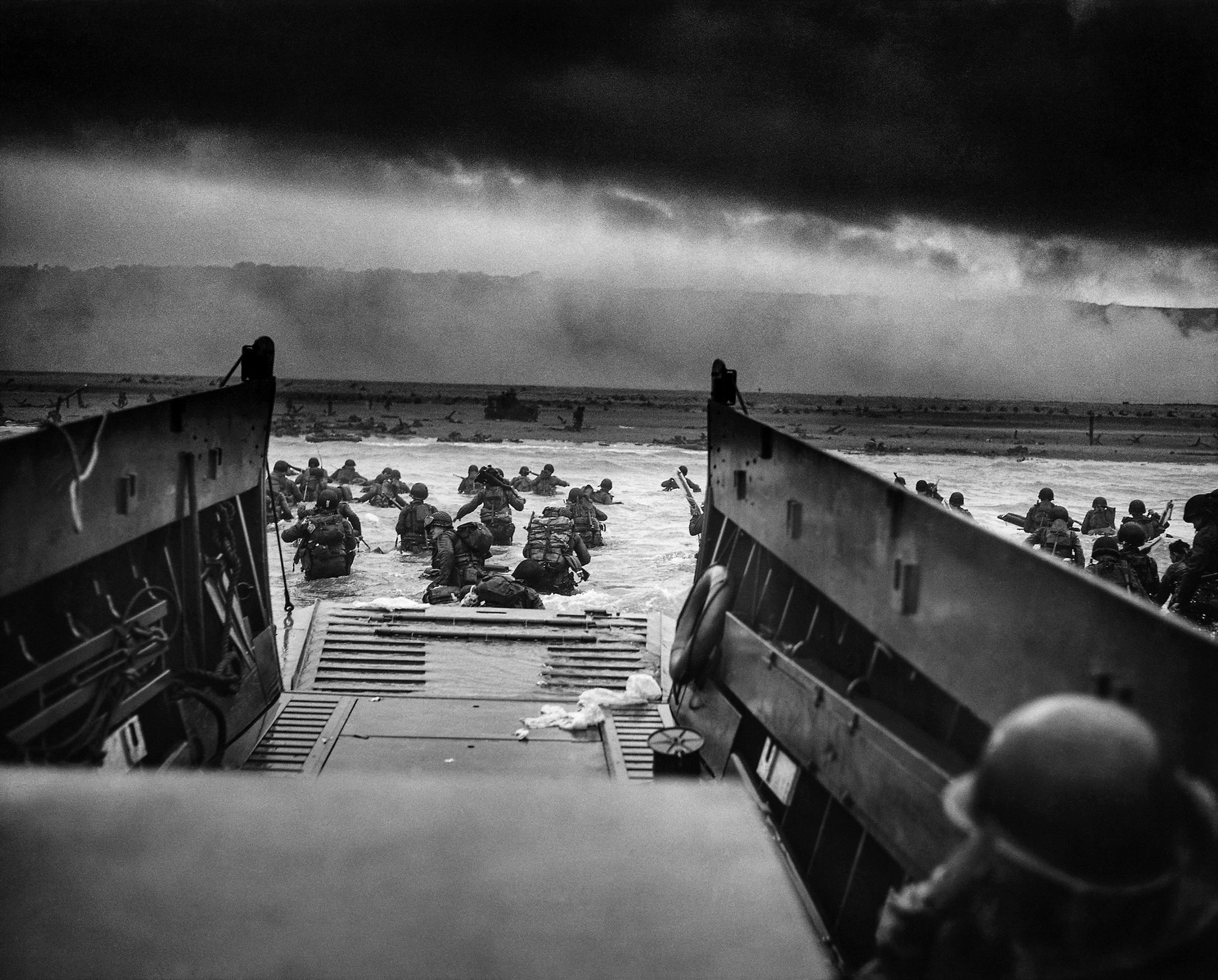 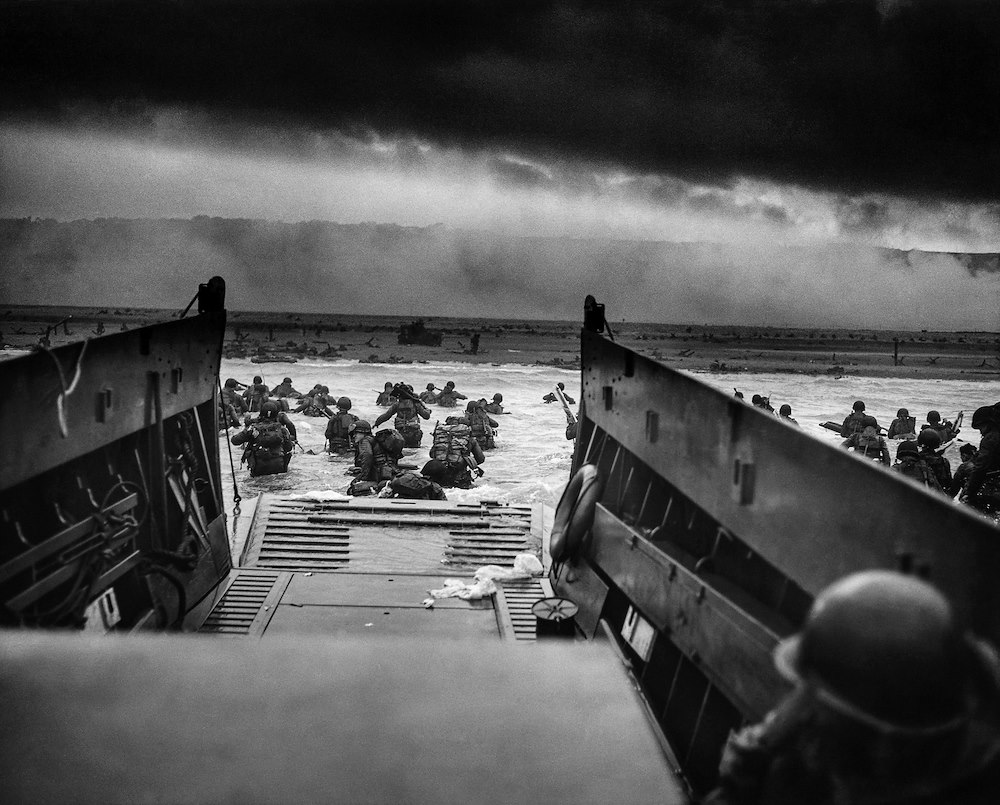 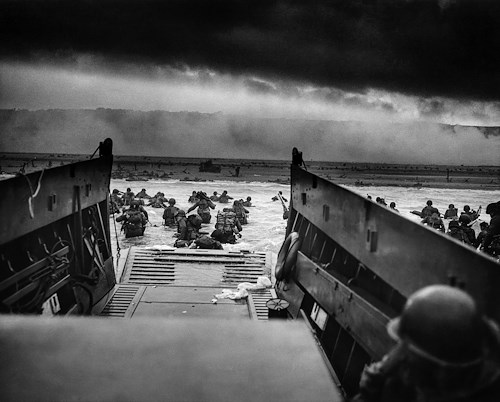 U.S. Army soldiers disembark a landing craft at Normandy, France, June 6, 1944. By the end of the day, about 160,000 Allied troops had landed on five Normandy beaches and three airborne drop zones. The invasion marked the beginning of the final phase of World War II in Europe, which ended with the surrender of Germany the following May. (Photo by Coast Guard Photographer's Mate Robert F. Sargent)
Share:
Download image
Photo by:

On June 6, 1944, in Operation Overlord, Allied forces landed troops on the beaches of Normandy, France, for the largest amphibious assault in history. Gen. Dwight D. Eisenhower called the operation a crusade in which, “we will accept nothing less than full victory.” More than 5,000 Ships and 13,000 aircraft supported the invasion, and by day’s end, the Allies gained a foot-hold in Continental Europe. The cost in lives on D-Day was high. More than 9,000 Allied Soldiers were killed or wounded, but their sacrifice allowed more than 100,000 Soldiers to begin the slow, hard slog across Europe.

In a larger strategic sense, the successful Allied landing in France was a psychological blow to the German occupation of Europe. It called into question the German Army's ability to control western Europe, dramatically increase partisan activity against enemy occupation, and heartened the spirits of those fighting against Nazi tyranny. The balance of power on the continent was decisively tipped into Allied favor.

From D-Day on, the Allies would begin a drive into Germany that ultimately destroyed Adolph Hitler and the Nazi regime on May 7, 1945.

Every year, U.S. European Command Components and historic-lineage military units from the U.S. participate in D-Day commemoration in the Normandy region of France. Due to COVID-19, the most disruptive global crisis since World War II, most D-Day 76 events/ceremonies are cancelled this year. And while coronavirus has interrupted life around the world to an unprecedented degree, we continue the D-Day tradition by virtually honoring all the Allied forces who stood defiant against Nazi tyranny on land, at sea and in the air 76 years ago.

The following letter (in English and French), written by historic-lineage Army units to the French, highlights the importance of commemorating the event even though the coronavirus has forced all involved to do it virtually: 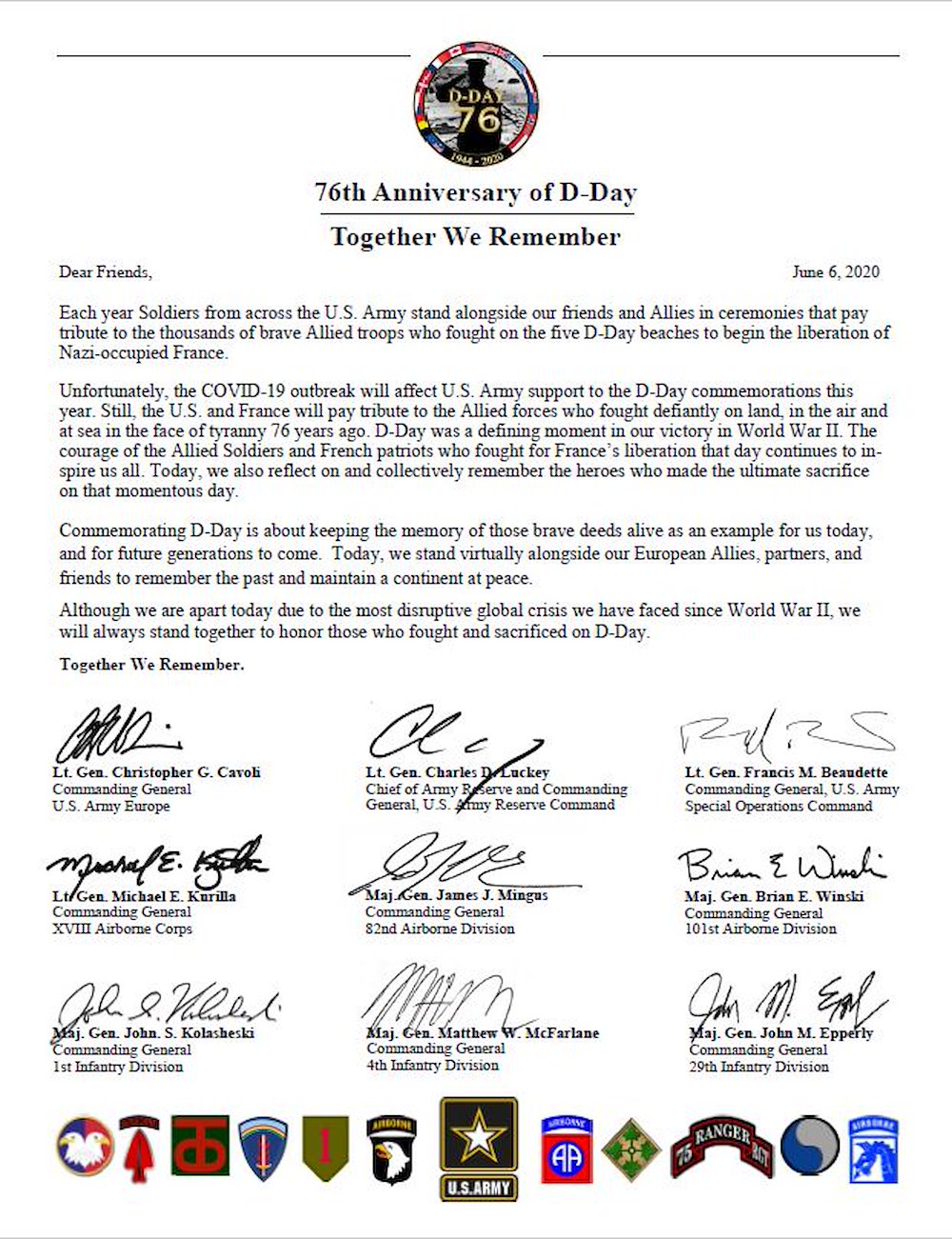 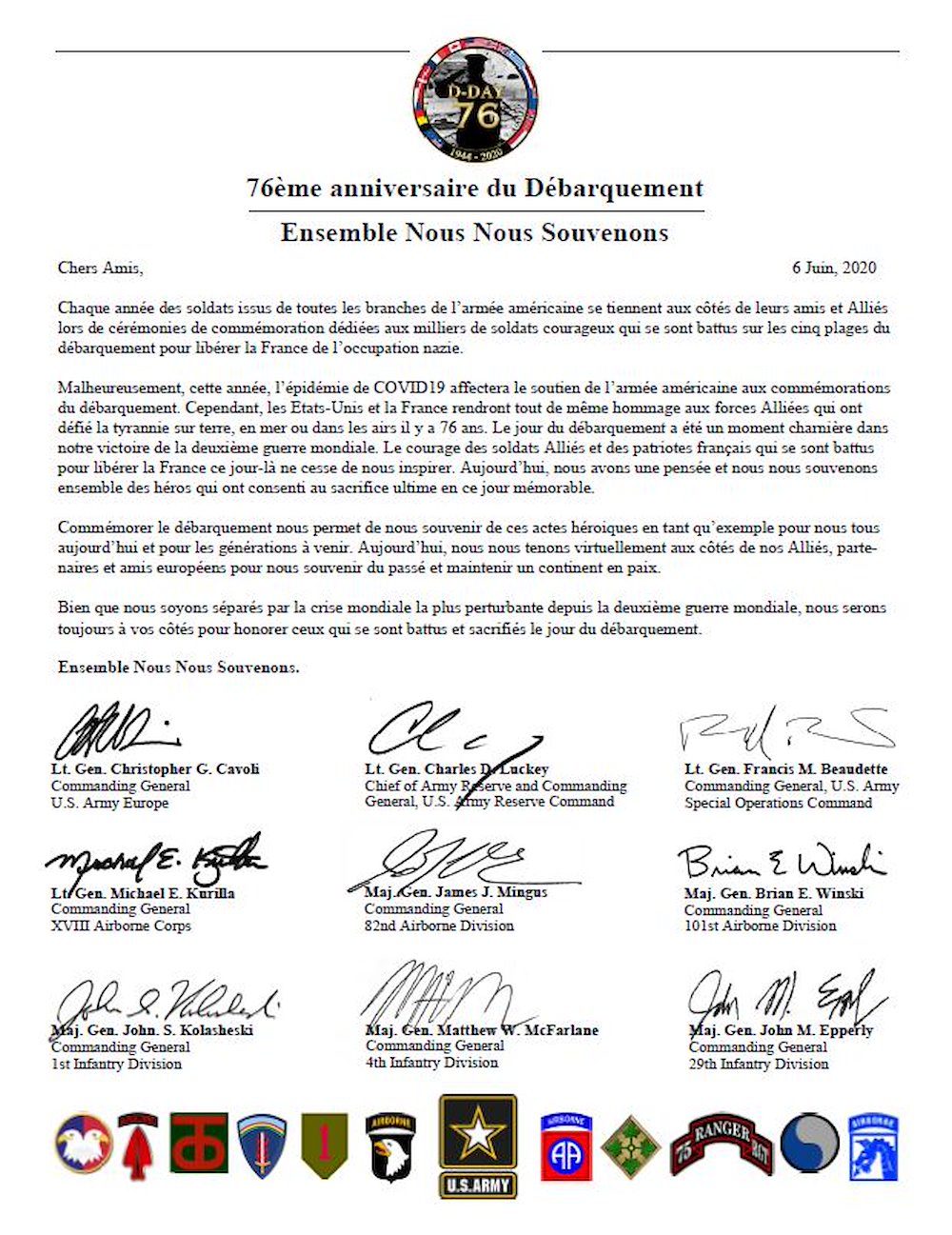 Learn more about D-Day below:

D-Day By The Numbers